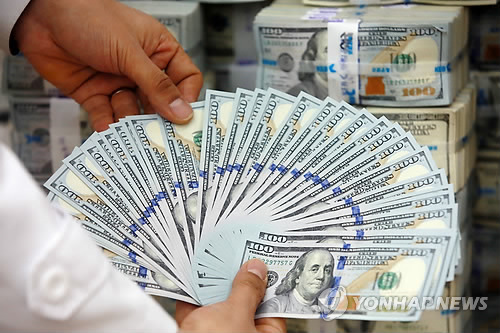 Korea’s foreign exchange reserves reached US$362.2 billion as of the end of last month, falling $1.4 billion from December, according to Bank of Korea data. (image: Yonhap)

The country’s foreign exchange reserves reached US$362.2 billion as of the end of last month, falling $1.4 billion from December, according to Bank of Korea data.

The amount of the foreign exchange reserves set a fresh monthly record from June 2013 until July last year, when the figure declined on a weakening euro and the repayment of foreign exchange stabilization bonds.

In a press release, the central bank explained that the weakening value of the euro and the pound offset management gains, pushing the foreign exchange reserves lower.

As of end-December, South Korea was the world’s seventh-largest holder of foreign reserves, trailing China, Japan, Saudi Arabia, Switzerland, Taiwan and Russia. The comparison for January data is not yet available.