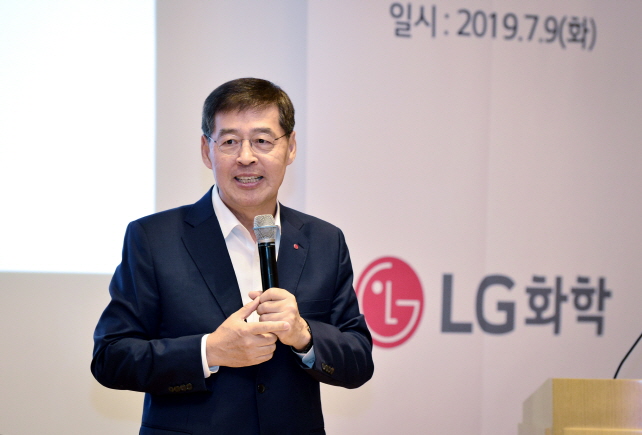 LG Chem CEO Shin Hak-cheol said the company is targeting 59 trillion won (US$49.9 billion) in sales by 2024, with 31 trillion won coming from its battery business.

Last year, the company’s battery sector accounted for only 23 percent, or 6.5 trillion won, of its total sales of 28 trillion won.

“We want to build strength to become a true global player in the industry,” Shin said in his press meeting in Seoul.

“By the end of this year, we’ll see 70 percent our revenues coming from overseas, with half of our employees working outside South Korea.”

Petrochemical products currently account for more than 60 percent of LG Chem’s sales, but Shin said it will lower that portion to the 30 percent range over the next five years.

He added that the company aims to double revenue from the United States and Europe.

To boost its competitiveness, Shin said LG Chem will invest a record 1.3 trillion won in research and development (R&D), and will increase the number of its research workforce from 5,500 to 6,200 by the end of this year.

“We’ll look into strategic options on poorly performing businesses,” he said. “That includes the sale of a business unit, establishment of a joint venture and acquisition of others.”

Shin said LG Chem is not affected by Japan’s recent export curbs, which restrict exports to South Korea of high-tech materials mainly used for chipmaking, but the company will prepare for the Asian neighbor expanding its measures to other sectors.

“We’ve started to look into possible scenarios,” he said.

“We use battery materials from two or three companies from South Korea, Japan, China and Europe. If the restrictions really expand, I’m sure we can overcome them by diversifying our import sources.”

To enhance the internalization of EV battery materials, Shin said LG Chem plans to beef up its production facility of cathode, one of the key materials in making lithium-ion batteries.

“We are planning to expand our cathode plant in Cheongju (in North Chungcheong Province),” he said.

Last month, the two sides signed a deal to establish a 50:50 venture, with each company chipping in US$87 million.

“The agreement includes the protection of technologies, which I’m satisfied with,” he said. “We heard that China’s subsidy issue will be resolved in the next year. The Chinese market will be better then than it is now.”