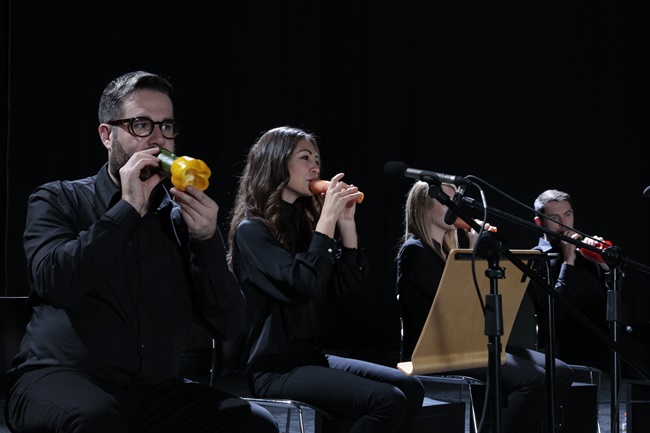 The South Korean consumer electronics company teamed up with the London Vegetable Orchestra for its latest commercial targeting social media, which has been watched over 85 million times over a period of four months across a number of social media platforms including YouTube and Facebook. (Image: LG)

SEOUL, Sept. 18 (Korea Bizwire) — LG Electronics’ new refrigerator commercial with an interesting twist has been proven a success on social media, according to the electronics giant on Sunday.

The South Korean consumer electronics company teamed up with the London Vegetable Orchestra for its latest commercial targeting social media, which has been watched over 85 million times over a period of four months across a number of social media platforms including YouTube and Facebook.

The commercial, which was filmed to promote the company’s latest Inverter Linear Compressor refrigerator, starts with members of the London-based vegetable orchestra picking fresh vegetables in a market.

Later in the commercial, a number of vegetables ranging from carrots to squashes stored in a non-linear refrigerator, then in LG’s inverter linear refrigerator, both for a week, are played as instruments by the vegetable orchestra in a recording studio, with the main message being that the London Vegetable Orchestra was able to replicate the sound of fresh vegetables after storing vegetables for a week in LG’s new refrigerator.

Since it was uploaded in various countries on a number of channels social media, the refrigerator commercial with an unusual, yet interesting twist has attracted millions of views.

The video has been watched nearly 1.8 million times as of today on LG Electronics Philippines’s YouTube channel alone, while the number of views for the same video on LG Colombia is poised to reach 2 million.

The success of LG’s refrigerator commercial follows in the footsteps of a commercial for the company’s premium microwave oven, NeonChef, which was released last December, which has since attracted more than 5.5 million views on social media including YouTube.

“Storytelling marketing, which is interesting and easy to understand for customers, seems to have worked well,” an LG official said.

Including another commercial of its washing machine that received an Advertising & Marketing Effectiveness Award at New York Festival, LG has previously received recognition for its creative and unique commercials.