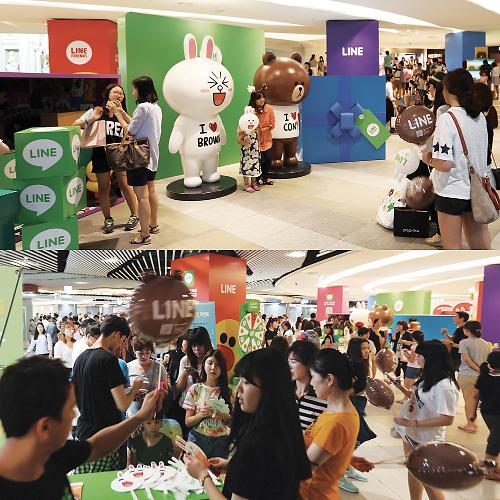 The store will offer various living goods including mugs and T-shirts designed with Line characters. The products not only include the already-much popular Line-Muurla collaborated products, but also “Brown and Sally Bottle,” which is an another collaborated production with “Rivers Bottle” and Line that sold over 2,000 in just four minutes of initial roll-out on online Line Friends Store.

There will also be diverse events held upon the opening of the store in the department store’s most popular venue, the Trevi Fountain. Anyone who dances to the “Linetown” theme song which became famous as well-liked idol group, B1A4, featured in the song, will be awarded with T-shirts and ear caps and some more events will follow to grant more prizes of Line products.

Line has already engendered big reactions from consecutively opening pop-up stores in Thailand, Indonesia, Taiwan, and Hong Kong, following the launch of the first one in Lotte Department store Young Plaza in Myeong-dong. The “Line Friends Store” in Myeong-dong has already become a famous tourist attraction. Line plans to put more efforts to connect with its customers by expanding the brick-and-mortar Line Friends Stores in various locations worldwide.