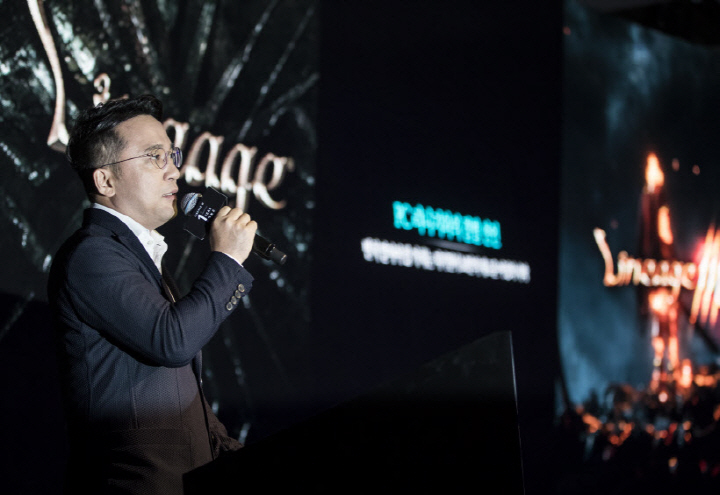 NCSOFT CEO Kim Taek-jin talks to reporters on May 15, 2018, to celebrate the one-year anniversary of “Lineage M.” (image: Yonhap)

“Lineage M” — bringing the original “Lineage” title to the mobile platform — has become the most popular app both on the Google Play Store and Apple’s App Store since its launch in 2017 in several countries, including South Korea and Taiwan.

“‘Lineage M’ is aiming for the global launch, extending beyond some countries,” CEO Kim Taek-jin told reporters in Seoul as “Lineage M” celebrates its one-year anniversary. “A totally different game is in the development process and likely to be showcased sometime soon.”

The massively multiplayer online role-playing game (MMORPG) plans to update with a very high degree of visual resolution yet brings back the classic game by featuring role-playing scenes. Players can create a character by choosing from a variety of classes and titles and can set up a team with other players and slay monstrous opponents in various environments.

The new global version is forecast to be first showcased in Japan and further in North America and China, with the exact launch date not yet disclosed.

“We will improve game contents for the global version and fix the charging system as well,” said Lee Sung-goo, a managing director at NCSOFT, forecasting that the new MMORPG will be a hit in Japan and North America where users are not used to MMORPGs.

NCSOFT said it will first update the game’s story to add indigenous characters only for “Lineage M,” unseen in “Lineage.”

As for “Lineage,” which celebrates its 20th anniversary this year, NCSOFT said it is in the process of developing the new version with details to be announced this summer.