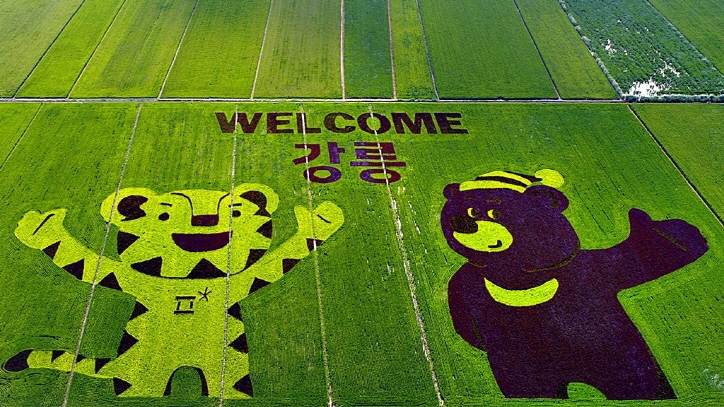 The mascots of the 2018 PyeongChang Winter Olympics — Soohorang (L), a white tiger, and Bandabi, an Asiatic black bear — are shown on a rice paddy in Gangneung, Gangwon Province, on Aug. 9, 2017. (image: Yonhap)

SEOUL, Sept. 8 (Korea Bizwire) — With the 2018 PyeongChang Winter Olympics just five months away, South Korea’s provincial governments are ramping up efforts to use the quadrennial event as a springboard for luring more foreign tourists.

The Winter Games will be held in the alpine county of PyeongChang, some 180 kilometers east of Seoul, from Feb. 9 to 25 with about 6,500 athletes and officials from 95 countries attending. It will be the first Olympics in South Korea since the 1988 Seoul Summer Games.

At the vanguard of such efforts is the government of Gangwon Province, where PyeongChang and other venues of the upcoming competition are located.

In a bid to attract as many foreign tourists as possible, the local government has come up with a tour program, which will take visitors to major tourist attractions in the mountainous province.

It has also mapped out other tour programs featuring the Demilitarized Zone (DMZ) that bisects South and North Korea and other security-related attractions, as well as film sites for famous Korean movies or dramas.

In addition, the regional administration plans to make the best of its tourism assets such as its outstanding natural beauty, cultural assets, traditional markets and famous restaurants, and diverse festivals.

Gangwon is not alone. Gyeonggi Province, which abuts Gangwon and the South Korean capital Seoul, has prepared a range of tour programs to attract foreign tourists during the competition period.

In the first half of this year, the provincial government held a series of road shows in 13 cities in nine Asian countries to promote its tour programs, and it has been distributing tour guide books in several languages.

On top of that, the Gyeonggi administration has been operating a DMZ ecotourism program for foreigners, while working with seven county offices to develop Olympic torch relay routes into tourism assets.

The Jeju government has designated the island’s signature tourist destinations as torch relay routes to promote them to the outside world. In March, it invited a delegation from Canada’s national CBS TV as part of its promotional activities.

In cooperation with the local tourism industry, Jeju has been carrying out marketing activities in Japan and Southeast Asian countries as well as in domestic cities.

Their efforts come as South Korea’s tourism industry has been struggling due to a tumble in Chinese visitors amid a long-running diplomatic row between Seoul and Beijing over the deployment of a U.S. missile defense system here.

“The domestic tourism sector has taken a hit from China’s retaliation against the THAAD deployment,” said a Gyeonggi official said on condition of anonymity. “We are preparing diverse programs in the belief that the PyeongChang Winter Olympics will come as a chance to overcome difficulties.”

In mid-March, China banned the sale of group tours to South Korea in an apparent retaliation against the installment of a Terminal High Altitude Area Defense (THAAD) battery on a former golf course in Seongju, about 300 km southeast of Seoul.