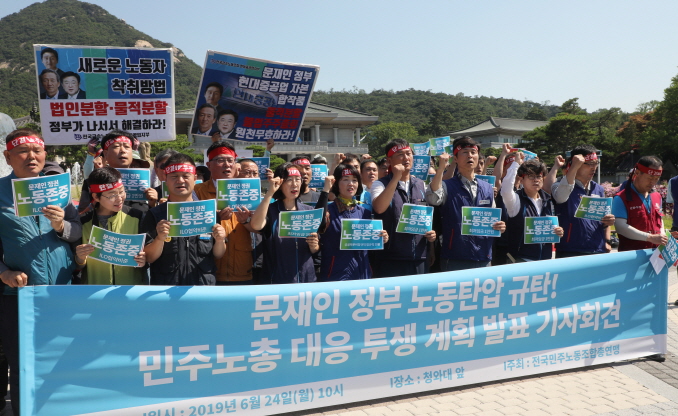 Members of the Korean Confederation of Trade Unions, a major umbrella labor group, holds a press conference on June 24, 2019, in front of the presidential office Cheong Wa Dae to announce a plan to stage a general strike following the arrest of its chief. (Yonhap)

SEOUL, Jun. 24 (Korea Bizwire) — A major umbrella labor group said Monday it will stage a general strike next month to protest what it calls the liberal Moon Jae-in government’s suppression of the labor sector.

The announcement by the Korean Confederation of Trade Unions (KCTU) followed the arrest of its chairman Kim Myeong-hwan on Friday on charges of orchestrating violent illegal rallies in front of the National Assembly.

The arrest sparked a fierce backlash from the militant labor group, which said the Moon government ditched its vow to put priority on improving the lives of workers and instead chose to suppress the labor sector.

“In line with Kim’s arrest, we will set up an emergency system to focus all available resources on protests and will immediately proceed with nationwide rallies,” the KCTU told a press conference held in front of the presidential office Cheong Wa Dae.

The group warned non-regular workers in the public sector will stage their first and largest protests on July 3, followed by a nationwide strike set for July 18.

It was not the first arrest of a KCTU chief, but the labor group, which was once friendly to the Moon government, apparently turned its back on the liberal government following clashes over key labor issues.

The KCTU’s pledge is expected to further strain the relations between the labor sector and the liberal government, and weigh on the Korean economy, which has slowed down amid a sluggish job market.

The labor circle had high expectations for the Moon government as the president was elected in May 2017 with a pledge to build a society that abides by labor standards and guarantees workers’ labor rights.

As part of his key election pledges on labor, Moon vowed to raise the minimum wage to 10,000 won (US$8.63) per hour by 2020 and introduce a shorter working hours system to 52 hours per week. He also promised to ratify key International Labor Organization (ILO) conventions.

But the KCTU is at odds with the government as the labor reform drive has not picked up. 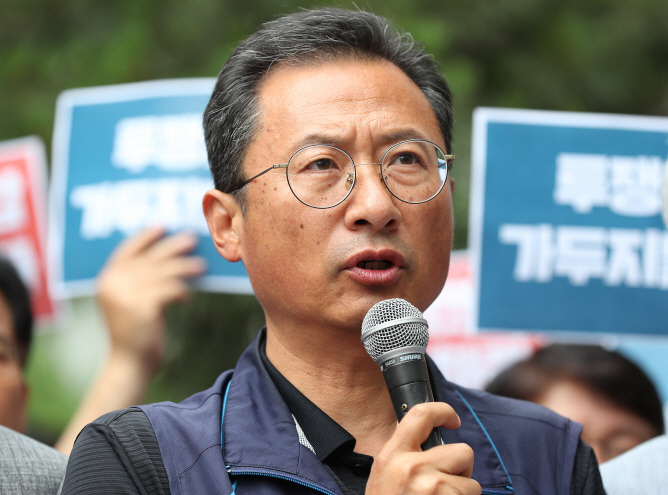 Kim Myeong-hwan, chairman of the Korean Confederation of Trade Unions, holds a press briefing on June 21, 2019, to denounce the government’s labor policy, before he appeared at a court hearing to review his arrest over charges of orchestrating violent illegal rallies. (Yonhap)

The tensions were sparked over a bill that counts some regular bonuses and welfare allowances as the minimum wage in 2018. The KCTU denounced the move for watering down the effect of the hike in the minimum wage.

The flexible working hour system calls for adjusting weekday working hours to 40 hours by allowing a worker to take a break to make up for overtime work within a certain period. The KCTU opposes extending the current three-month limit.

As for the minimum wage, the labor circle calls for Moon to abide by his election pledge. But the president has signaled flexibility, as steep hikes in the minimum wage have sparked backlashes from smaller firms and merchants.

Kim Kyung-ja, a chief vice chairperson of the KCTU who currently works as acting chief, said in a statement that the arrest of chairman Kim is tantamount to the Moon government’s declaration of war against the labor circle.

“Moon previously said Han Sang-gyun, the former KCTU head who was arrested under the previous Park Geun-hye government, lingers on his mind. But the Moon government trampled on the KCTU and put chairman Kim in jail,” Kim said

South Korea has two major umbrella union groups — the KCTU and the Federation of Korean Trade Unions (FKTU), which is the larger of the two.

The KCTU has boycotted participation in the Economic, Social and Labor Council, which is the presidential council for social dialogue.

The council is an expanded form of a tripartite panel of the government, management and labor that is aimed at resolving contentious social issues via dialogue.

The labor group plans to reset its relationship with the government but said it will decide later whether to continue to participate in government committees, to discuss labor issues, including the Minimum Wage Council.

The wage council, involving business and labor representatives and outside experts, is deliberating the level of next year’s minimum wage amid calls for freezing the hourly pay.