Starting tomorrow, visitors to water.nier.go.kr will be able to view hyperspectral imagery of the Nakdong River taken since 2015. (Image: Ministry of Environment)

SEOUL, Aug. 22 (Korea Bizwire) – Starting tomorrow, visitors to water.nier.go.kr will be able to view hyperspectral imagery of the Nakdong River taken since 2015.

The footage was captured planes equipped with hyperspectral imaging sensors. Developed by the National Institute of Environmental Research, the purpose of the endeavor was to observe and record levels of blue-green algae (cyanophyta) in bodies of water around the country.

The sensors are able to separate the wavelengths of visible rays (400 to 700 nanometers) and near-infrared rays (700 to 900 nanometers) into hundreds of smaller parts, which gives them the ability to detect light along a wider spectrum than the naked eye. 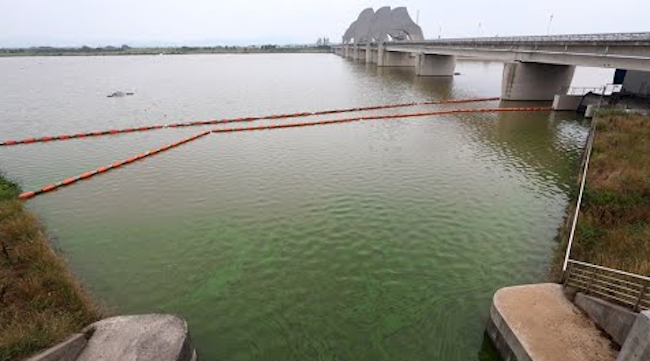 Prior to the use of hyperspectral imagery technology, experts measured the amount of algae in the water by collecting samples and counting them through a microscope.

The previous method also had the drawback of human error, as the color of algae could not always be distinguished easily. In contrast, the sensors eliminate this problem by explicitly detecting and recording different colors.

The technology has already served the purpose of identifying key areas along the Nakdong River where algae are most likely to grow. The accumulated data can also be used to detect seasonal differences in algae growth.

The ministry will look to expand the use of the technology across the entire country by next year. It will also continue to improve the technology to ensure greater accuracy in its recordings.

A system of communications will be introduced to coordinate efforts in combating algal blooms. By 2019, technology to observe and record algae via satellite is expected to enter development.