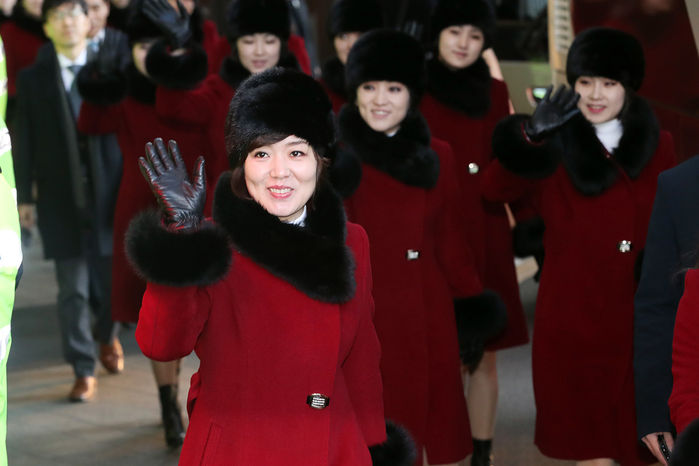 The Samjiyon Orchestra crossed the military demarcation line at 11:25 a.m. to return home after a seven-day stay in the South, according to a pool report.

The art troupe, led by Hyon Song-wol, leader of the all-female Moranbong Band, held a performance in Gangneung, a sub-host city of the Games, on Thursday and another in Seoul on Sunday.

The art troupe’s performances were the first concerts by North Koreans in the South since 2002, when Pyongyang sent a cohort of 30 singers and dancers to Seoul for a joint event.

For the finale of the concert, Seohyun, a member of South Korean pop group Girls’ Generation, and North Korean female singers, sung together the North Korean song “Let’s Meet Again” and a famous Korean song titled “Our Wish Is Unification.”

Meanwhile, Kim Ryon-hui, a North Korean defector who publicly expressed a wish to go back to North Korea, abruptly showed up at the checkpoint in an apparent unauthorized visit to the customs, immigration and quarantine (CIQ) office.

The woman claimed that she went there to bid farewell to the art troupe, waving the Korean Unification Flag, which was used during the two Koreas’ joint march at the opening ceremony Friday.

“Farewell, girls,” she said. “I am Kim Ryon-hui, a citizen of Pyongyang,” she was quoted as saying by the pool report.

“I hope to go home as soon as possible,” she yelled while being blocked by government officials.

It is not immediately known how she came to be at the CIQ, where civilian visits are tightly controlled.

Kim, who defected to Seoul in 2011, has demanded that the government repatriate her, as she was deceived by a broker into coming here. Seoul has rejected her request.

In exchange for allowing the reunions of separated families, North Korea is demanding that Seoul return Kim and the 12 women who defected to the South en masse in 2016 after working at a restaurant in China.