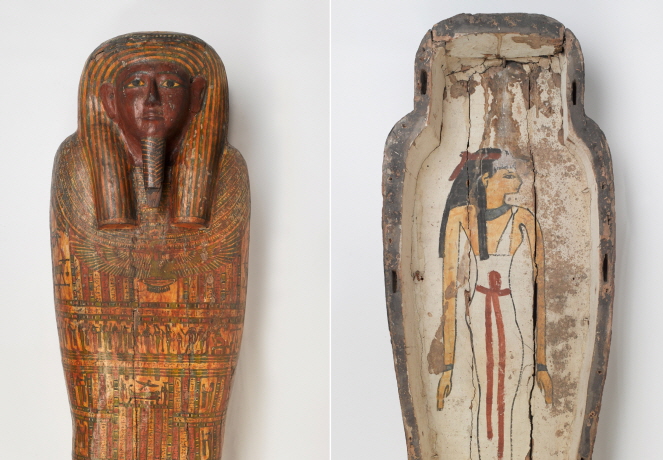 The Coffin of Thothirdes. (image: National Museum of Korea)

SEOUL, Dec. 16 (Korea Bizwire) — Seoul citizens and visitors will be given a rare opportunity to appreciate about one hundred ancient Egyptian treasures, including a 2,700-year-old mummy and coffin, free of charge over the next two years, the National Museum of Korea (NMK) said Monday.

The NMK said the Asian Gallery located on the third floor of its permanent exhibition hall has been transformed into a World Cultures Gallery that consists of an Egyptian section, Central Asian section, India-Southeast Asian section and Chinese section.

The World Cultures Gallery displays 531 pieces, including 94 ancient Egyptian treasures and artifacts on loan from the Brooklyn Museum, located in New York, the NMK noted.

It said the Mummy and Coffin of Thothirdes believed to have been produced about 2,700 years ago, the granite head of a Ptolemaic king presumed to have been 12 years old and an ibis coffin decorated with gold, silver and crystal are among those on display in the Egyptian section.

It will be the first time in three years for the NMK to host an exhibition of Egyptian treasures.

The NMK, which has supported the Brooklyn Museum’s Korean section since 2013, held a special exhibition of 230 ancient Egyptian objects from the U.S. museum for four months from December 2016.

“Previous special Egyptian exhibitions held in 2009 and 2016 were short and paid. But the latest exhibition is free of charge and will last about two years until Nov. 7, 2021, allowing many people to comfortably see ancient Egyptian treasures,” an official at the NMK said.

Following the Egyptian exhibition, the NMK plans to hold an exhibition of Mesopotamian civilization artifacts in cooperation with the Metropolitan Museum of Art in New York, the official said, noting additional exhibitions of African, Oceanian, American and Islamic treasures are also scheduled in the future.