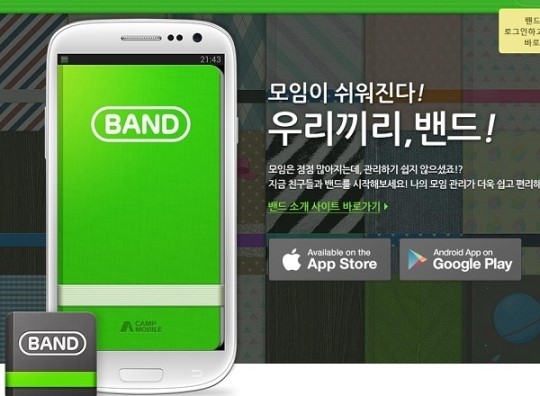 BAND moves beyond chat and messaging to help keep your “social circles” or groups (known on the app as “bands”) in the loop with a full suite of free tools.  The private social networking app allows for traditional posting and chat for groups, as well as group polling, community calendars, file sharing and photo albums. In addition to the BAND mobile apps (iOS, Android), users also have the ability to access the app from their desktop at http://band.us. BAND provides the tools for people to communicate as they would in real life, within small bands, rather than an auditorium-like setting such as other large social networks.

Consumers are growing tired of big social media – from oversharing “friends,” privacy/security concerns and personal data being sold – to not feeling they can express themselves freely or being barraged by info. With the introduction of BAND in the U.S., Naver is invested in consumer’s shifted behaviors towards more private group sharing platforms that better mirror how people socialize offline. These platforms allow people to communicate more authentically with the people who matter most to them.

Users can create a BAND and include just a few people or up to 1,000.  BAND allows users to create closed groups for communicating with people in different areas of their lives, such as family, classmates, sports teams or sororities/fraternities members, making it simple to share, archive, and organize activities. Unique profiles can be created for every group, and bands can be customized with unique cover images and colored ribbon schemes.

The private group sharing app distinguishes itself from other messaging and social media apps by providing a private sharing experience and a rich set of tools for group socializing, while remaining visual and user-friendly. Once the app is downloaded, anyone can create a “band” and choose who they want to invite. The invite-only, closed groups help promote relevant communication by preventing unwanted status updates from popping up and allowing content to only be shared directly with those who matter most. BAND supports group chats, one-to-one and one-to-few.  In addition, BAND users can share web URL’s, text, photos, videos, gifs, PDFs, location, stickers, documents and Dropbox files, and vote on group polls.

“We’re excited to expand Naver Corporation’s worldwide footprint with a U.S. version of Camp Mobile’s BAND app,” said Doyon Kim, General Manager of BAND’s U.S. operations. “By mirroring the way people socialize in real life, BAND aims to address the shift from sharing information across public social networks to communicating via private group apps by making it easy to stay social, organized and in touch with the people that matter most in your life.”

The BAND app can be downloaded for free from Google Play and the Apple Store. Bands can be created as soon as the app is downloaded, and users can invite anyone to join a Band, even if they have not yet downloaded the app yet. Watch a video of the BAND app features in action.

Camp Mobile Inc. with its offices in Palo Alto, CA and Seoul, Korea, is a wholly owned subsidiary of Naver Corporation (035420:KS). Launched in 1999, Naver Corporation is an Internet content service operator that is headquartered in Seongnam, South Korea. Naver was the first Korean web portal to develop its own search engine, and is Korea’s largest internet company in terms of net profit, holding nearly 80 percent of the South Korean search market. The maker of the BAND social messaging app for groups, Camp Mobile was established in 2013 as Naver’s exclusive mobile affiliate, and focuses on the development and marketing of cutting edge mobile applications. The messaging app LINE is also a subsidiary of Naver. To learn more, please visit http://band.us