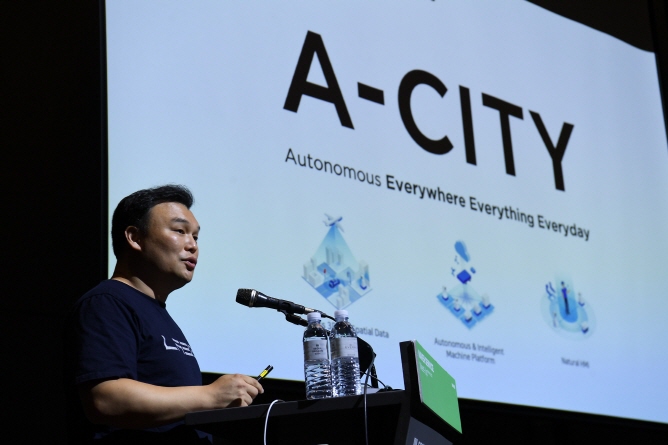 SEOUL, Jun. 25 (Korea Bizwire) — Naver LABS — a R&D subsidiary of South Korea’s dominant internet portal and search engine Naver Corp. — on Tuesday said it will develop a solution for a more precise and detailed map that is crucial for autonomous driving and automated environments.

Under the road map, the R&D center will focus on developing robot and artificial intelligence (AI) based technologies, such as high definition (HD) mapping, localization and navigation that will eventually serve as a basis for what it calls “A-city.”

“A-city is a new city environment where various types of machines move around by themselves to create a new kind of connection, and AI and robots collect data to create an automated environment,” Naver LABS CEO Seok Sang-ok told reporters in Seoul.

Among the lineup of technology is a hybrid HD map that is based on Naver Lab’s autonomous driving and mapping technology that provides mapping solutions by combining aerial images and information from road surfaces.

“Precise and robust localization is a significant task for autonomous vehicles,” said Seok, adding that Naver aims to implement algorithms to estimate where vehicles are with an error of less than 10 centimeters.

Naver LABS said it plans to develop a detailed map of over 2,000 kilometers of roads in Seoul and the surrounding capital area by the end of the year.

The company further said it currently has various technologies that are needed for the full realization of “Level 4″ self-driving cars.

In a Level 4 car, there is no need for the driver to take control, as the vehicle is designed to perform all safety-critical driving functions and monitor road conditions.

“We plan to receive further permission from the Ministry of Land, Infrastructure and Transport for a road test of our autonomous vehicles to test our technologies on various situations on the road,” he said.

Naver LABS earlier joined the race for self-driving by obtaining a license after the transportation ministry introduced a temporary license system for self-driving cars under development in February 2016.

The center, originally created by Xerox in 1993, was the first in the world to explore a number of technologies, notably in the field of AI.