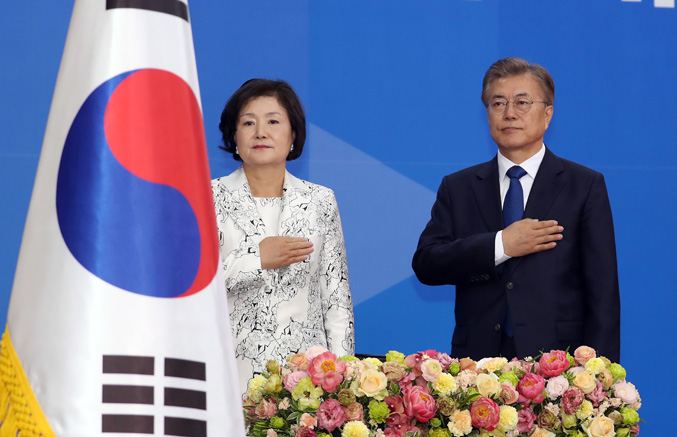 Waving and giving a thumbs up to Moon’s well-wishers and other citizens, a beaming Kim has been alongside Moon all during a grueling yet successful campaign that has brought the couple to the presidential residence, Cheong Wa Dae.

Her mold-breaking outfit at Moon’s inauguration ceremony in the National Assembly on Wednesday signaled that she would play a meaningful role in fostering national harmony. She wore a knee-length white dress with flower patterns, which her aides said signified her yearning for unity. Traditionally, first ladies wear the traditional Korean hanbok costume on such an occasion.

Keen public interest is now centered on what kind of role the 62-year-old first lady would play — a role that had been vacant during the former government led by Park Geun-hye, the unmarried female president currently on trial for corruption charges.

In a recent media interview, Kim indicated her interest in Moon’s key policy pledge related to child upbringing, a key issue that the nation has been struggling to tackle amid concerns over a fast-graying population and low birthrate.

She was referring to the so-called 10-to-4 policy under which workers are allowed to flexibly decide their work schedules between 10 a.m. and 4 p.m. to spend more time with their families.

“I hope to make a family-friendly society with the belief that one’s child is everyone’s child,” she said in an interview with the local English newspaper Korea Herald.

Past first ladies have had their own trademark projects. 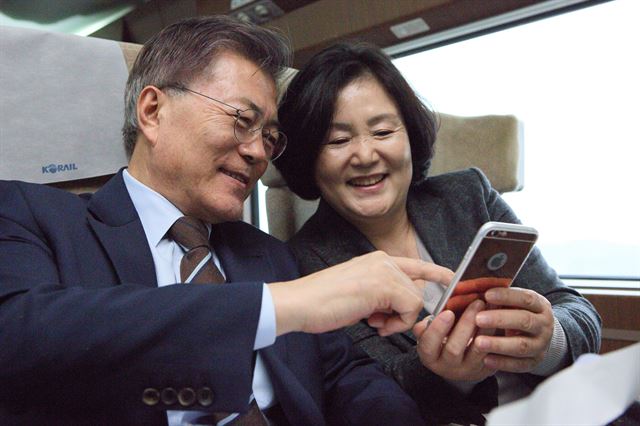 With her arrival at Cheong Wa Dae, the office of the “second personal secretary to the president” — traditionally in charge of the affairs of the first lady — is expected to serve its original purpose. Under the Park administration, the office was alleged to have served Choi Soon-sil, Park’s close confidante at the center of the corruption scandal.

Moon and Kim first met when he studied law and she majored in music at Kyunghee University in Seoul in the 1970s. Since then, Kim has been the closest supporter to Moon through his turbulent life as a student activist, human rights lawyer and presidential aide and opposition politician.

Moon once said his wife is full of affection and straightforward advice for him.

“She proposes some wine when she thinks I look exhausted. Sometimes, she delivers vivid opinions from the people to me and pours out bitter advice,” said Moon in a recent media interview.