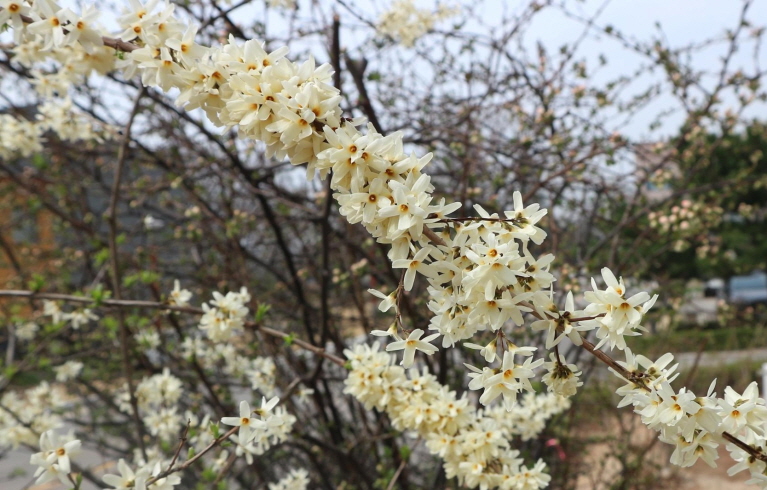 DAEJEON, Jun. 5 (Korea Bizwire) — The Korea Forest Service’s National Institute of Forest Science has developed an LED technology that enables white forsythia, a rare plant that grows only in Korea, to multiply in large volumes.

According to an announcement by the National Forest Service yesterday, the newly developed technology uses a specific wavelength of LED light at the stage of tissue culture.

Although researchers were aware that the plant’s stem grows slowly, the use of LED light was found to speed up the process.

When a mix of blue and red lights were used, plant stems grew 1.5 times longer than those grown under normal (white) light.

This made it possible for three new branches (or more) to be derived from a single branch, expediating the growth process.

By differing the type of LED light wavelength, scientists are able to control the growth process of plants.

The same method can also be applied to other rare and endangered plants, offering a promising method of preservation and maintenance of certain plants and arbor.

The white forsythia is a plant native to Korea, and is found only within the Korean peninsula.

The plant is being protected on both sides of the demilitarized zone, having been designated as a “natural monument” in both Koreas.

The plant is known for its beautiful flower, which gives off a pleasant scent, while its extract is known to be effective in whitening skin and preventing wrinkles.

A scientist at the Korea Forest Service said that the organization will continue to develop technologies that will help reproduction efforts in rare plants.