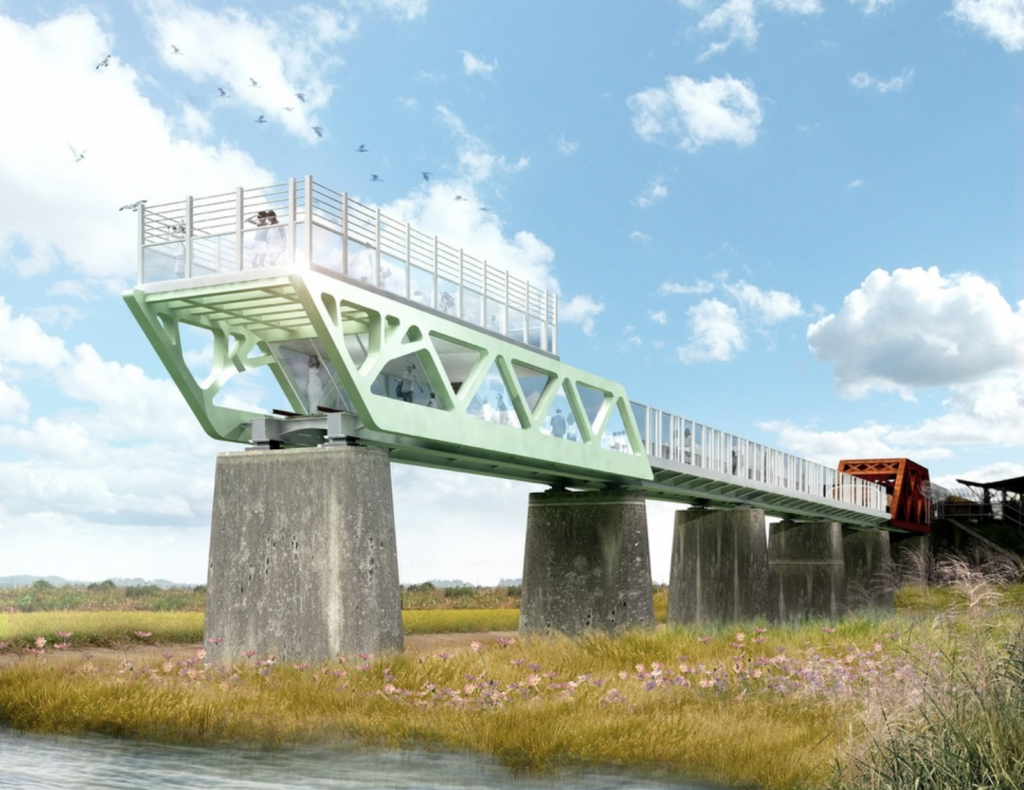 The skywalk experience will be divided into three themes: past, present, and future. (image: Gyeonggi Province)

PAJU, Nov. 8 (Korea Bizwire) – Dokgae Bridge, located some 40 kilometers north of Seoul and eight kilometers south of the DMZ, connects the north and south banks of the Imjin River, near Imjingak. It was built in 1906 as a railway bridge, and as a set of two bridges – northbound and southbound.

The bridges suffered severe damage during the Korean War, with only their piers remaining. But following the ceasefire treaty in 1953, the southbound piers were restored as a pathway for 12,733 South Korean and United Nations Command prisoners of war who managed to return south, and the span was thus given a new name, the Bridge of Freedom.

Together with the Bridge of No Return, Dokgae Bridge symbolizes the pains of war and separation.

The new skywalk that’s being built will stand on the piers of the northbound Dokgae Bridge, which remained untouched since its demise. A total of 2 billion won ($1.75 million) was injected into the renovation project, according to the Gyeonggi Provincial Government, and the new bridge is expected to open in December.

The skywalk is dubbed Naeil-ui Gijeoksori, which translates into Train Whistle of the Future.

It will be 105 meters long and five meters wide, and will make use of five century-old piers from the former Dokgae Bridge.

The skywalk experience will be divided into three themes: past, present, and future.

The ‘past’ section of the skywalk is decorated in the form of a passenger coach from the former steam train that used to operate on the Gyeongui railway line, which once connected Seoul and Pyongyang, and even Manchuria.

The ‘present’ part of the skywalk features a restored section of the Gyeongui railway and railroad ties on a glass floor, offering visitors a view of the Imjin river bank and even bullet holes on Dokgae piers from the war.

The ‘future’ portion is divided into two floors. The lower level is a semi-open observatory deck with a view of the foot of Dokgae Bridge and the river, whereas the upper level provides a wider view of Imjin River, its ecosystem, and the civilian-restricted zone south of the DMZ. It is also a place of longing for reunification and the reopening of the railway, an official said.

“The new skywalk brings together Korea’s history of separation, its culture, and the region’s ecosystem,” he said. “We expect it to become a hallmark attraction reflecting our wish for reunification.”