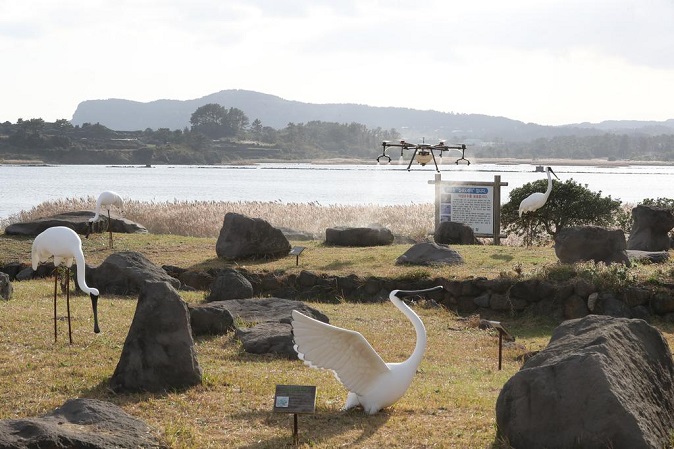 A drone sprays disinfectant at a seasonal home for migratory birds on South Korea’s southern Jeju Island on Nov. 23, 2020, following the detection of a highly pathogenic avian influenza strain in the region. (Yonhap)

A joint research team from Korea University and Seoul National University announced Thursday that it had developed EliF, a molecular sensor that glows only in cells infected with the bird flu.

Previously, a polymerase chain reaction (PCR) test or using antibodies against virus proteins was necessary to diagnose avian flu, both of which took a couple of days to process.

Now, using the newly developed molecular sensors, the cellular changes that occur during the initial stages of viral infection can be verified through the sensor’s glowing effect, allowing the diagnosis to be processed within 24 hours, the research team said.

“The EliF molecule enables the study of the characteristics of a cell showing a high infection rate during the early stages of the avian flu infection,” said Lee Jun-seok, a chemical biology professor at Korea University who spearheaded the research.