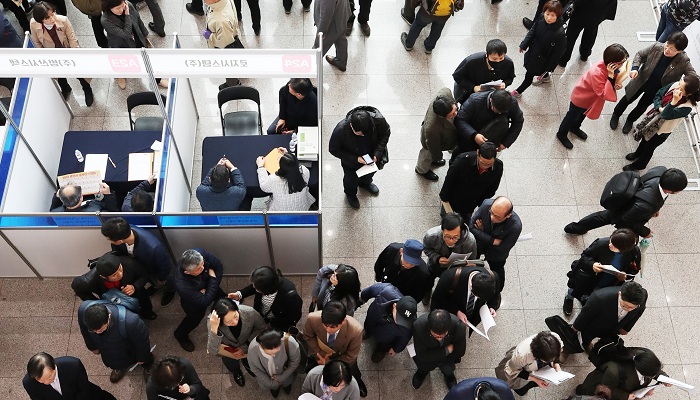 Middle-aged job seekers wait for interviews at a joint fair in Busan. (Yonhap)

SEOUL, Jan. 24 (Korea Bizwire) — The perception that all aspects of Korean society are unfair is more widespread among older citizens, a recent survey revealed.

Kim Seok-ho, a sociology professor at Seoul National University, released an analysis of the results of a survey in which 21.8 percent of respondents believed all aspects of Korean society were ‘unfair’.

The survey was conducted by the Korea Institute of Public Administration with the participation of 8,000 adults between the ages of 19 and 69, the results of which were analyzed by Kim and categorized into four fields: ‘overall positive assessment’, ‘educational fairness’, ‘market fairness’ and ‘distributional fairness’.

Sorted by age, respondents in their 40s had the highest proportion of those with ‘overall negative assessment’ (23.8 percent) towards Korean society. The same group accounted for 19.1 percent of those in their 20s, and 19.4 percent among 30-somethings.

Respondents in their 20s were most likely to believe in ‘market fairness’ (16.6 percent) thinking that while the education and welfare systems are unfair, South Korea has a fair economy, politics and fair distribution of opportunity to go up the social ladder.

In contrast, respondents in their 20s had the smallest proportion of people who believed in ‘distributional fairness’, in which people believe that South Korea has a fair education and welfare system as well as fair distribution of opportunity to climb up the social ladder.

“Younger South Koreans are more optimistic about the fairness of Korean society than seniors,” Kim said. “Seniors have experienced unfairness in certain fields, which have made it difficult for them to give positive assessments.”