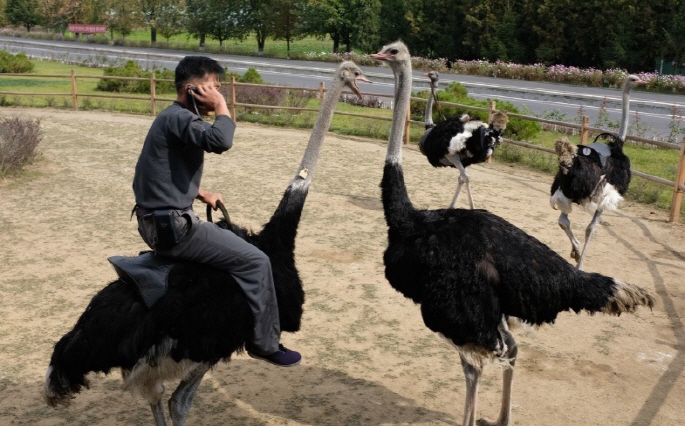 In August, the North Korean regime unveiled a newly-renovated ranch to the outside world after completing the remodeling. (image: Koryo Tours)

SEOUL, Dec. 16 (Korea Bizwire) — If there are cows in South Korea, there are ostriches in North Korea, providing meat in addition to leather, bone and feathers.

In particular, toothpicks made from ostrich bones that act as a strong anti-bacterial agent are known to help kill germs in the mouth and protect tooth enamel.

Meanwhile, tobacco pipes made of ostrich bone are much more capable of blocking tar or removing nicotine than ivory pipes.

How did ostriches, which are much more frequently associated with Africa than East Asia, end up in North Korea?

The origin dates back to the 1990s, when North Koreans struggled through a spell of severe food shortages.

The regime’s then-leader Kim Jong-il, who was in power at the time, ordered farmers to breed ostriches for meat, saying it could become a valuable source of protein and provide leather to make household goods.

Since then, the birds have spread to various parts of North Korea following the opening of the first ostrich ranch, which was built in a suburb of Pyongyang in 1998.

In August, the North Korean regime even unveiled a newly-renovated ranch to the outside world after completing the remodeling.

It remains to be seen, however, whether ostriches actually helped ease the food shortage.

The Associated Press reported in July, 2011 that ostrich meat is only served as a delicacy at high-end restaurants in Pyongyang and remains inaccessible to most North Koreans.