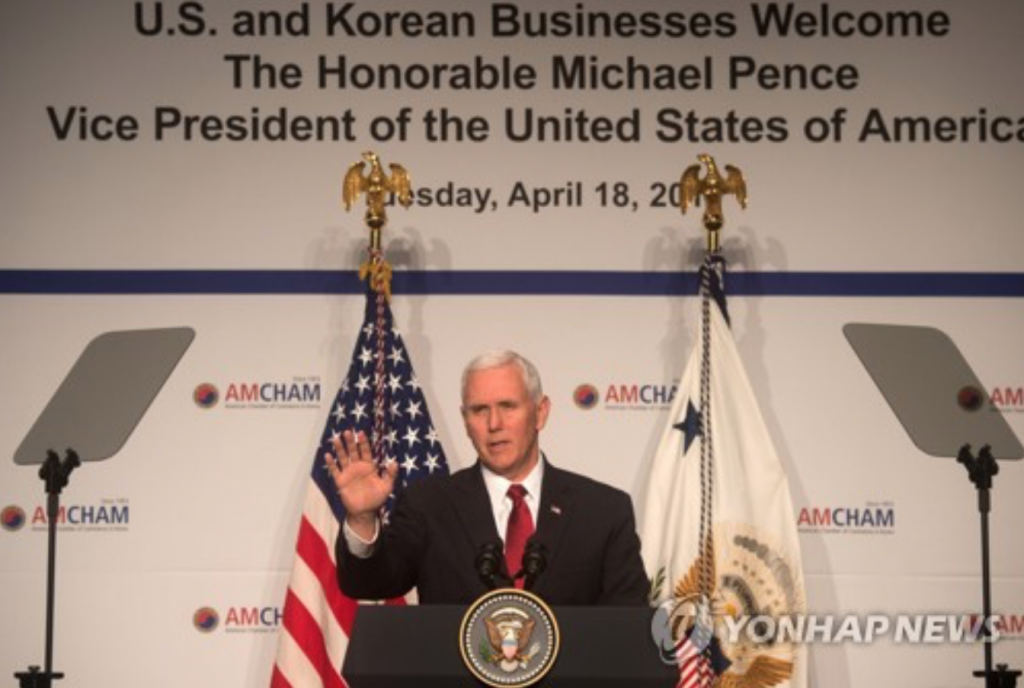 “Our businesses continue to face too many barriers of entry which tilled the playing field against the American workers and American growth.. We are reviewing all of our trade agreements across the world to ensure they benefit our economy as much as they benefit our trading partners.” (image: Yonhap)

The visiting vice president made the remarks during an American Chamber of Commerce meeting in Seoul. South Korea and the United States enforced the so-called KORUS FTA in 2012.

“Most concerning is the fact that the U.S. trade deficit with South Korea has more than doubled since the KORUS came into effect. That’s the hard truth,” Pence told the meeting.

“Our businesses continue to face too many barriers of entry which tilled the playing field against the American workers and American growth.. We are reviewing all of our trade agreements across the world to ensure they benefit our economy as much as they benefit our trading partners,” he added.

His remarks are in line with things President Donald Trump said before taking office. He has blamed free trade deals including one with South Korea for killing U.S. jobs, raising the need for adjustments to the terms of the deal.

Pence, who is in Seoul as part of his Asia-Pacific trip, mentioned beneficial effects of the FTA with South Korea, citing expanded two-way trade and more inflows of investment into the U.S. since the deal went into effect.

He called the increased economic exchanges between the two countries something worth a “round of applause” but noted that they should be “honest about where their trade relationship is.”

“We know that you can help us level that playing field between our two countries and move toward a system that maximize jobs and growth and a brighter future for the people of the U.S. and people of South Korea. We will work toward that end to reform the KORUS in the days ahead,” he said.

The focus of the Trump administration’s America First policy internally is on slashing corporate taxes and regulations, Pence stressed in the meeting attended by South Korean pool reporters.

“Make no mistake about it. Under President Donald Trump, over-regulations’ days are over and there’s a new era of jobs, growth and prosperity in the United States of America,” he said. “Truth is a stronger America means a stronger economy for South Korea and for all of our trading partners. You will be glad to know the U.S. will continue to be a driver of global growth and we will drive the growth like never before.”

President Trump’s agenda will continue to renew America’s reputation as the premier investment destination in the world, Pence said, expressing his confidence in further strengthening the bond between Washington and Seoul in commerce and friendship.

Since its inauguration in January, the Trump administration has ratcheted up calls to revisit the KORUS. A recent report by the U.S. Trade Representative (USTR) recommended a major review of the bilateral deal. The report accused the FTA of causing a “dramatic increase” in the country’s trade deficit.

Experts argue, however, the assessment fails to take into account South Korea’s service-sector deficit with the U.S.

During the same period, however, South Korea’s trade deficit in the service sector spiked 28.4 percent from $10.97 billion in 2011 to $14.09 billion in 2016, according to a report by the Korea International Trade Association (KITA).

In that vein, the FTA has equally benefited the allies rather than just one side, experts say.

Following the morning meeting with the business community, Pence wrapped up his three-day visit to South Korea and left for Japan on an Asia Pacific trip that will also bring him to Indonesia and Australia.