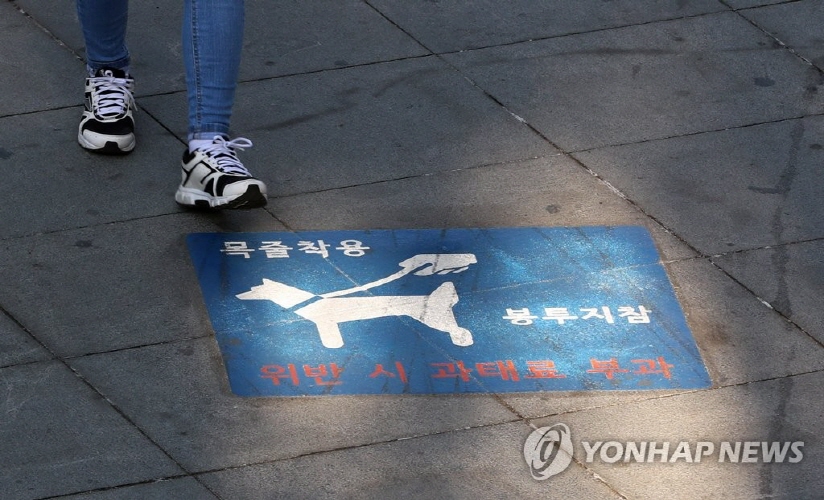 A sign at one of Seoul-based park warns visitors to use leashes and name tags for their dogs.
(image: Yonhap)

SEOUL, Nov. 3 (Korea Bizwire) – Kim Min-ji, a 28-year-old living in northern Seoul, said she has recently become more conscious of pedestrians when walking her Pomeranian at nearby parks, after a French bulldog owned by a popular singer bit a neighbor who later died from complications in October.

Jeon Ga-yong, a 34-year-old resident of the capital who also owns a dog, said she can sometimes hear people whisperer “A dog recently killed a person” or “I am afraid of dogs nowadays” whenever she is out with her pet.

“No matter how tight I tighten the leash, some people approach me to just start an argument,” Jeon said. “The problem is that some pet owners are hesitant to walk their pets nowadays.”

A rising number of pet owners in South Korea said they experienced similar issues after a business woman who owns a popular restaurant chain died after being bitten by a dog owned by popular singer and actor Choi Si-won.

Setting aside medical arguments that the dog bite was the direct cause of the victim’s death, the incident nevertheless sparked a debate on adopting stronger regulations related to pets in the country.

According to the Ministry of Agriculture, Food and Rural Affairs, around 10 million South Koreans are estimated to own pets as of 2015, which accounts for roughly a fifth of the nation’s population.

The high number of people owning pets that are usually dogs and cats has made it common place to see owners with animals on the street, in parks and other public places.

Not all South Koreans, however, are comfortable with the rising number of pets.

Shin Hae-in, a 28-year-old civil servant living in Suwon who is expecting a baby in two months, says she is afraid that such unleashed dogs may become potential threats for her child in the future.

“For young children, even small dogs can be major threats,” Shin said. “People are free to own dogs, but they should be responsible and avoid frightening others. Dogs are not just cute companions for people like me.”

Amid the calls for tougher regulations, the ministry said it plans to adopt more stringent rules on punishing pet owners in case their animals cause harm to others. The ministry added it plans to raise the fines on owners of unleashed dogs to 500,000 won (US$448) from the current 100,000 won and gradually expand the scope of punishment down the road.

The government in addition plans to adopt a mandatory education program for owners of dogs with aggressive traits, such as Rottweilers, American pit bull terriers and Staffordshire bull terriers.

Other options include giving out cash rewards for those reporting pet owners breaking the rules to authorities, which is scheduled to be implemented in March.

The ministry added it will carefully review rules of other countries and reflect the public’s opinion, although it may take time to work out the details.

“Even animal rights groups differ on the exact scope of the so-called dogs with aggressive traits. They also have different stances on the level of punishments,” an official from the ministry said.

While pet owners here mostly agree that people violating rules, such as unleashing their dogs in public places, should be punished, they also argue that the focus should not be set on implementing more regulations on animals.

Instead, pet owners are calling on authorities to create an environment where everyone can coexist by building more pet parks and providing education programs for dog owners. Forcing all dogs to wear muzzles like critics claim cannot be a solution, they added.

“Making dogs wear muzzles can make them more tense,” Kim Min-ji said. “Although I agree that laws on pets should be revised due to more pets, muzzles are actually not necessary for small ones.” 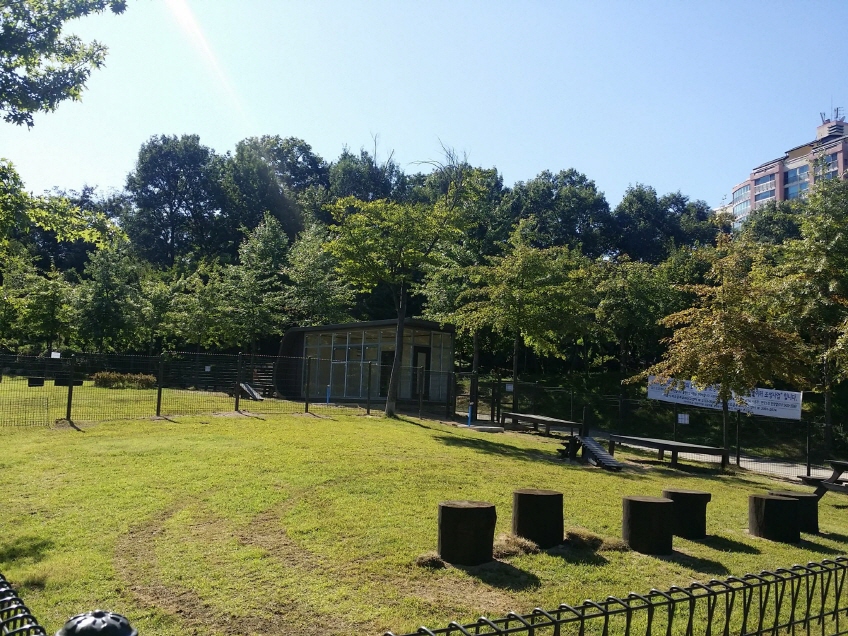 The view of a park specially designated for pets. (image: Dobong-gu District Office)

Some animal rights’ activists argued muzzles should not be enforced even on larger dogs considering their biological characteristics.

“Muzzles are torture for dogs as they do not have sweat glands and must control body temperature through tongues,” Park So-youn, who heads the South Korean office of the Coexistence of Animal Rights on Earth (CARE), told Yonhap News Agency, claiming they are especially harmful for pugs or bulldogs, which have shorter heads.

“Although dogs are capable of exchanging emotions with people, they have a different mechanism of delivering feelings and communicating,” Park said, claiming that treating dogs with a lack of understanding their nature is the cause of making some of them actually more aggressive.

“For instance, pet owners should refrain from telling others it is OK to touch their dogs as ‘they do not bite.’ For some dogs, being touched by strangers is like being molested,” the CARE chief said.

“A well-trained dog never bites or hurts people and other animals over its lifetime,” Park added, saying dogs can live with people if they are treated nicely and trained well. “We can consider making people get a license before adopting hounds and make sure they are not bred for illegal activities, such as dog fighting.”

Park added that South Korea should also consider expanding the number of parks exclusively reserved for pets, where animals can roam freely.

Dobong-gu in northern Seoul last month opened what it calls a “pet playground,” marking the first pet-designated park operated by a district office within the capital.

“Although a rising number of people are adopting dogs in the district, some residents say they are uncomfortable when encountering animals while walking,” an official from the district said. “At the park, the dogs are free to play without leashes. Non-pet owners can also feel at ease as the park has fences.”

Building such pet-friendly parks, however, was not always an easy decision for other areas.

Another district in southern Seoul was forced to shut down a similar park even before the official opening due to complaints filed by residents. The Seocho district office said it received more than 300 complaints, especially from people with children.

“Considering the rising number of pets in South Korea, people should understand that pet playgrounds are important because they allow dogs to release their energy, which helps make them less aggressive,” the activist said.

Others said it is also important for pet owners to become more considerate while walking their dogs.

“Pet owners should understand that leashes are not only meant to prevent dogs from attacking something but to actually protect the animals from danger,” Jeon said.