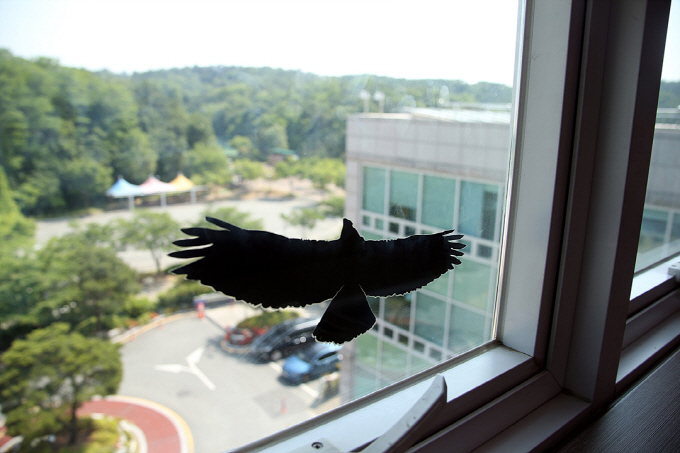 A bird saver is installed on the window of a building in Ulsan. (Yonhap)

GWANGJU, Dec. 29 (Korea Bizwire) — An animal rights organization has announced plans to begin a thorough investigation into the use of pictures of rapacious birds on transparent sound walls, which it claims are ineffective against preventing birds from colliding with these types of barriers.

The ‘Angry Vegans’, an animal rights organization active in the southwestern city of Gwangju, said Tuesday that it will begin an investigation into bird collisions against transparent sound barrier walls in the area next year.

In a preliminary study recently conducted at two apartment complexes, the organization found that 51 birds perished in a single day after colliding with transparent sound barriers.

The organization claimed that pictures of rapacious birds displayed on the noise barriers aren’t effective in preventing bird collisions.

At one of the sound barrier walls at a local apartment complex, 41 birds have died in collisions despite the pictures of raptors.

At another soundproof wall located in a different apartment complex, 10 birds were found dead. The wall did not have any pictures of the birds of prey.

Based on these results, the organization decided to conduct a systematic investigation into the issue.

“The sound barriers set up around highways and roads have turned into bird cemeteries,” one of the activists who participated in the preliminary study said.