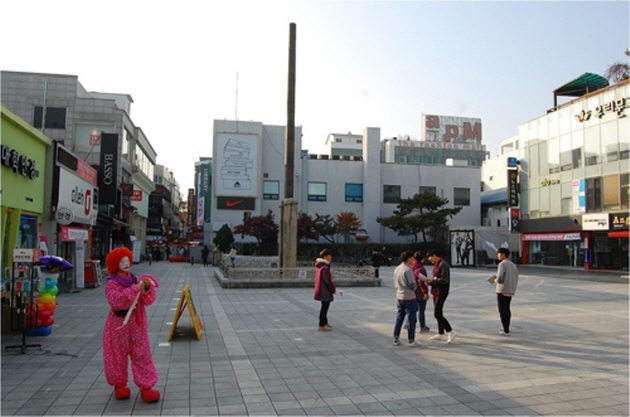 Iron Flagpole of the 918-1392 Goryeo Dynasty, known as “Cheol Danggan” in Korean, in Cheongju (image: Yonhap)

CHEONGJU, Jun. 2 (Korea Bizwire) — A task force of the state-run Korea Tourism Organization’s branch in Cheongju, central South Korea, said Thursday it plans to complete a project aimed at turning a plaza that is known for its flagpole from Korea’s medieval dynasty into one of the top tourist spots by creating a dazzling night view there by the end of this month.

According to the business group, which has focused its efforts on revitalizing traditional markets, the project involves illuminating the plaza and the Iron Flagpole of the 918-1392 Goryeo Dynasty in the city’s downtown, known as “Cheol Danggan” in Korean, to enable visitors at a nearby market to enjoy it at night.

The Cheongju municipal government and an association of merchants at the Seongan Road Market had requested the Cultural Heritage Administration grant permission for the implementation of the project as part of efforts to draw more customers and tourists to the market.

In March, the administration in charge of construction projects involving cultural properties greenlighted the 200 million-won (around US$179,000) project after the business group pledged to preserve the plaza’s original form and have experts supervise it.

The project called for the recreation of the plaza as a lively rendezvous for young people in their teens and 20s, highlighting the medieval flagpole.

Among the plans is using optical fiber and light-emitting diodes (LED) to illuminate the plaza and the flagpole, respectively.

Other measures being considered include LED ad boards, digital signs and a nighttime laser show.

A business group official said, “We hope we will make good use of Cheol Danggan as a splendid attraction, adding the improvement of the plaza through the project will boost projects aimed at improving business at traditional markets in the city.”

The “Cheol Danggan” Iron Flagpole, which is located at the entrance of the now-demolished Yongdu Temple site, was built in 962, during the reign of King Gwangjo, the fourth monarch of the Goryeo period. Danggan, which means flagpole in Korean, was used to affix a flag called “Dang” to pay tribute to the virtues of Buddha and Bodhisattva or to expel evil spirits, when Buddhist ceremonies were performed at temples.

The only iron flagpole remaining in South Korea that has inscriptions detailing the time of the erection has 20 iron tubes put together up right, with each iron tube measuring 43 centimeters in diameter and 65 centimeters in hight. It also has two pillars supporting the pole.

Prior to the designation of the national treasure, the flagpole had been poorly protected due to the lack of understanding the importance of its value as a cultural property and budgetary constraints, among others.