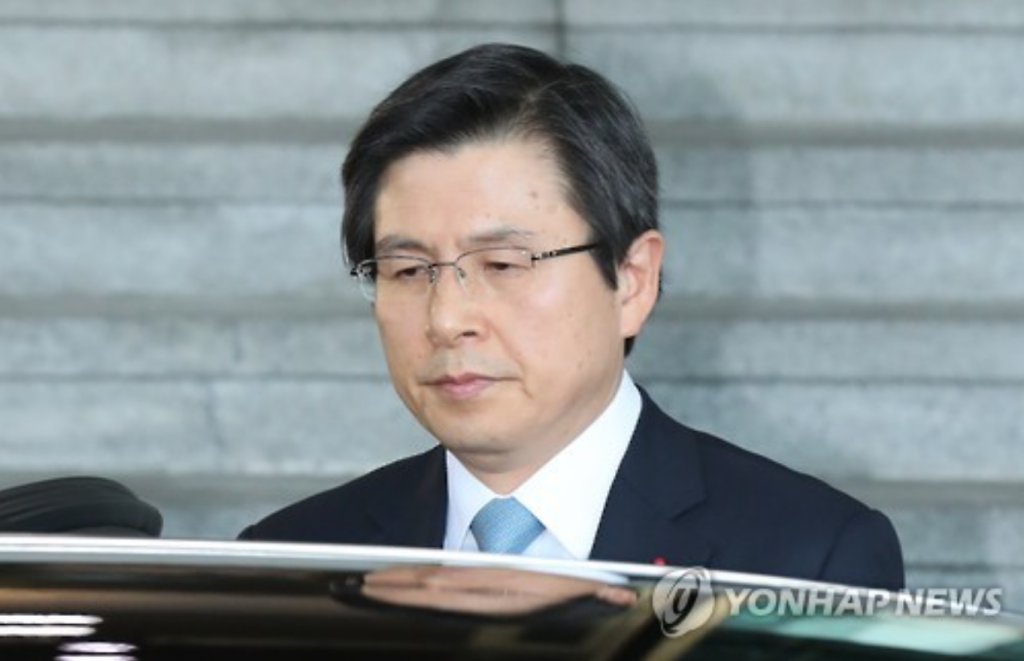 The motion passed with the approval of 234 lawmakers from the 300-seat National Assembly, meeting the minimum requirement of 200.

Hwang is set to hold an emergency Cabinet meeting at 7:00 p.m., which will be followed by a public address at 8:00 p.m. The prime minister is also set to hold a session of the National Security Council (NSC) at 9:00 p.m.

The premier’s office said Hwang is expected to stress his goal of managing state affairs without any disruption.

Park will hand over her powers to the prime minister immediately after receiving the official resolution document from the National Assembly, allowing Hwang to take full control, exerting power over both internal and external affairs.

Legal experts, however, said acting presidents must minimize the scope of their activities, adding they cannot exercise the same rights as the president. Park also remains the president before the court’s final ruling.

Hwang is expected to focus on maintaining a stable national security posture, especially amid the prolonged tension with Pyongyang. Park’s vacancy is also expected to bring challenges in South Korea’s preparations to deal with the upcoming U.S. administration, which will be led by President-elect Donald Trump.

Shortly after the passage, Hwang called Defense Minister Han Min-koo and asked him to pay extra attention in regards to national security, adding North Korea may take advantage of the situation and seek some sort of provocation.

“North Korea will consider South Korea’s security situation as vulnerable. It may carry out provocations through various methods including nukes, missiles, localized attacks and hacking that can fuel confusion among the general public,” Hwang said during the call.

Hwang also called Foreign Minister Yun Byung-se and asked him to maintain South Korea’s sanction programs against the North. The prime minister then asked the foreign ministry to make certain that foreign countries are aware that South Korea’s economic and social affairs will remain unchanged.

The prime minister requested the Ministry of the Interior to have police stand on high alert as well.

The outbreak of avian influenza in the country, dispute over the state-authored history textbooks, and economic policies are cited as some of the major tasks for the acting president, observers said.

The Constitutional Court’s review on the legitimacy of the motion may take up to 180 days, with experts saying it is unlikely for the court to reach a decision before March, considering the complexity of the issue.

Accordingly, Hwang may serve a longer term as the acting president compared with 2004, when former Prime Minister Goh Kun replaced late former President Roh Moo-hyun for 63 days. The court then turned down the impeachment.

The opposition bloc, meanwhile, claim there should also be a Cabinet reshuffle, including the prime minister. Experts, however, said there are legal issues for Hwang to nominate a new prime minister amid Park’s absence.

If Park voluntarily resigns, however, South Korea must hold the presidential election within two months of her exit, which will shorten Hwang’s term as the acting president. Park, however, has been ruling out such an option, adding she will await the court’s decision.

While the law allows Hwang to receive president-level security and privileges, pundits said the prime minister is unlikely to accept such support, as Park remains the country’s president until the Constitutional Court’s definitive ruling.

Currently, the Presidential Security Service, which has 486 staff members, protects Park, while the prime minister is guarded only by police officers.

An official from the Prime Minister’s Office also said Hwang will not change things.

Records showed the then-acting President Goh in 2004 was treated for the most part like other prime ministers.