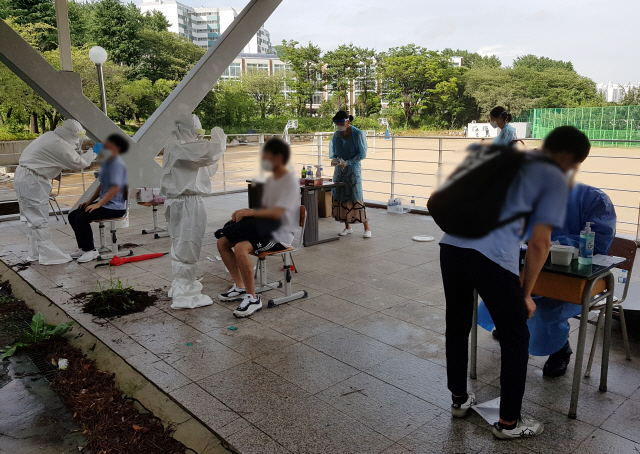 High school students get tested for COVID-19 at a school in the southern port city of Busan on Aug. 12, 2020, in this photo provided by the Haeundae community health center.

According to health officials and municipal governments on Thursday, five high school students in Yongin, south of Seoul, have tested positive this week.

The first patient was confirmed to have the virus on Monday, and four more — one classmate and three from a different school — were confirmed the next day. All five are friends.

In a separate case, a high school student who lives in Goyang, northwest of Seoul, tested positive last Wednesday after the student’s mother was confirmed to have been infected with the coronavirus earlier in the day.

In both cases, the teenagers were having in-person classes.

While health officials were studying how they became infected with the virus, the Ministry of Education cautiously predicted that they could have been infected while hanging out after school.

“In the Goyang case, the two are close friends who go to cram schools and hang out together after school,” an official from the ministry said.

“The five students in Yongin began showing symptoms after they spent time together during weekends, so we cannot rule out transmissions outside school.” 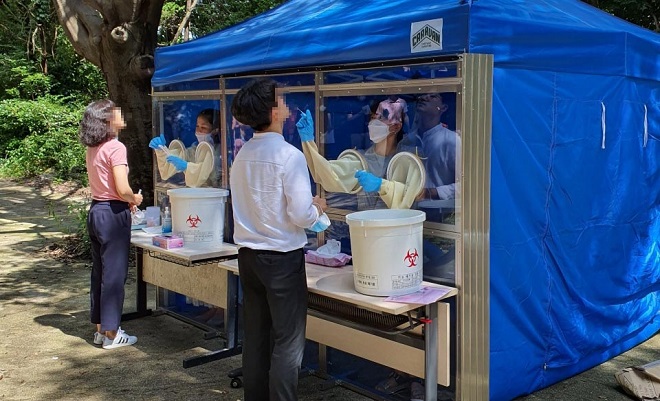 School officials get tested for COVID-19 in Busan on Aug. 13, 2020, in this photo provided by the Haeundae Ward Office.

In the afternoon, two more student infections were confirmed in the port city of Busan. Another student, who lived in the school’s dormitory, tested positive the previous day.

Of the two who tested positive earlier in the day, neither lived in the dormitory nor attended cram schools.

The city’s health authorities have been tracing the infection route, which remains largely elusive.

Following Wednesday’s case, the authorities had the patient’s 117 contacts get tested, and they plan to expand the testing to the school’s 982 students, faculty and staff members.

Following Wednesday’s case, the authorities had the patient’s 117 contacts get tested, and they plan to expand the testing to the school’s 982 students, faculty and staff members.

The cases have unsettled educators, health authorities and parents alike, as most schools are scheduled to end summer vacations and open for the fall semester at the end of this month.

In the provinces with dwindling coronavirus caseloads, which exclude the capital Seoul and its adjacent cities, some education offices strongly recommend that schools in their districts switch back to in-person instruction, largely due to a widening gap in learning.

The ministry said the decision lies with each autonomous office as to what type of instruction it will institute in the upcoming session.

Experts warned that schools should remain cautious about full-scale reopening in the middle of the pandemic.

“COVID-19 infections are likely to increase in cooler weather,” Kim Woo-joo, a professor for infectious diseases at Korea University in Seoul, said.

“Just because there weren’t big school infections in the first semester, that does not mean it is safe to go for full reopening in the coming one.”