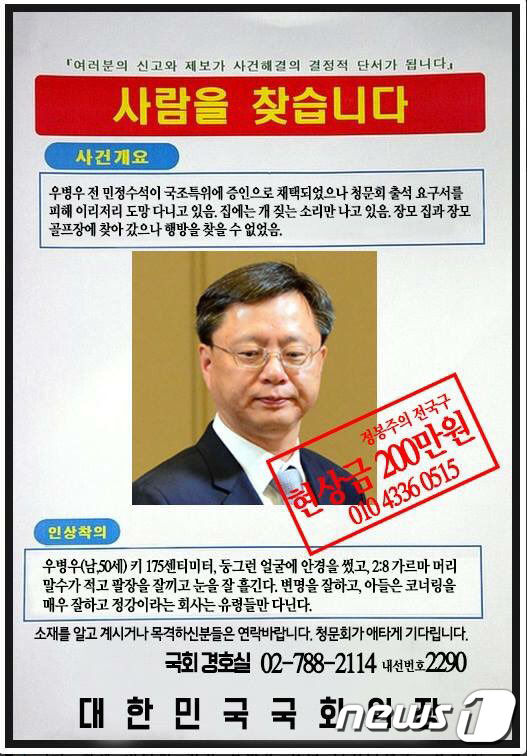 The bounty was first introduced last week by former lawmaker Chung Bong-ju, who created a bank account to fund the rewards, and started by depositing 2 million won ($1,714) himself. (image: Twitter)

SEOUL, Dec. 13 (Korea Bizwire) – Did a crowdsourcing-manhunt force Woo Byung-woo out of hiding?

Woo, an ex-presidential secretary, finally appeared after spending weeks in hiding, and announced Tuesday he would stand before the National Assembly for questioning into his suspected role in Korea’s ongoing corruption scandal.

Woo refused to show up to the December 7 parliamentary hearing, after which the parliament issued an “order of accompaniment” forcefully obliging Woo to attend the hearing unless he had a justifiable reason to be absent. The order was never delivered, however, with officials failing to track his whereabouts.

The disappearance triggered public rage and at the same time infuriated lawmakers, some of whom even decided to offer monetary rewards for any informant providing a crucial lead to Woo’s location.

The bounty was first introduced last week by former lawmaker Chung Bong-ju, who created a bank account to fund the rewards, and started by depositing 2 million won ($1,714) himself. Chung later upped the bounty to 5 million, at which point Minjoo Party of Korea lawmaker Ahn Min-seok promised to deposit an additional 5 million won into the account.

With Saenuri Party lawmaker Kim Sung-tae and ex-lawmaker Jung Chung-rae pledging 1 million won each, in addition to ordinary citizens also contributing to the endeavor, the total reward money jumped to 21 million won as of Tuesday morning, 13 million of which was deposited into Chung’s account.

Following Woo’s announcement that he would present himself at the hearing, claiming that he was not avoiding the investigation but trying to hide from journalists, Chung said all of the money contributed to the account will be donated to the Emergency National Action for Ousting Park Geun-hye Administration.

Chung was residing in Germany with her mother and her daughter until Choi voluntarily returned to Korea in October, and failed, like Woo, to show up to the parliamentary hearing on December 7.

Although no bounty has been put up for Chung yet, it may just be a matter of time until a similar manhunt drives her out of hiding too.