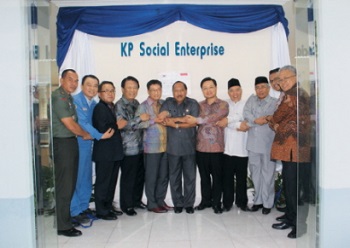 POSCO will outsource tasks from its environmental field to the social enterprise. (image: POSCO)

SEOUL, Nov. 8 (Korea Bizwire) – POSCO announced on November 6 that it launched KP SE, a social enterprise in Cilegon, Indonesia, on the 4th.

The POSCO Foundation and the Korea International Cooperation Agency (KOICA) jointly established the enterprise supported by Krakatau POSCO which has a lot of management experience.

The Korea’s steel maker will outsource tasks from its environmental field to the social enterprise. Local unemployed young people are planned to be hired to the enterprise, and the profits are going to be re-invested in the local area for its development. The steel maker plans to use the profits to help local young people and the underprivileged become self-supported.

The employees will work to manage the environment around the steel works such as drainage construction, afforestation, and recycling. At the same time, they can study through its training program. Those who reach a certain standard will have an opportunity to be transferred to Krakatau POSCO or other partner companies.

“POSCO has established four social enterprises since 2008 to help local people stand on their own feet in South Korea. A total of 750 Koreans are currently working for those companies. The experience we have will contribute to the local development in Cilegon,” said Lee Young-hun, vice-president of the company.