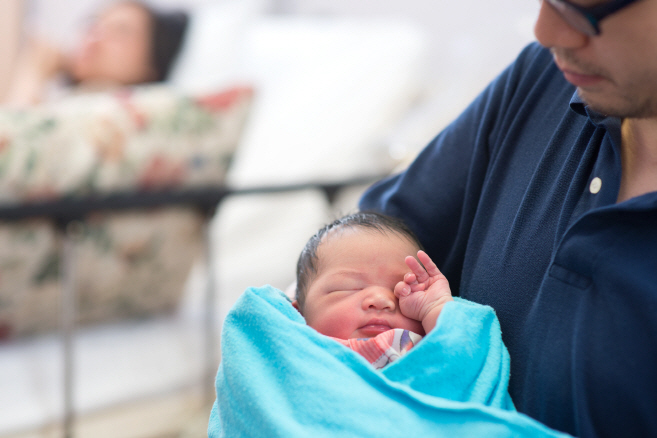 According to the Ministry of Employment and Labor, 22,297 male private sector employees took child care leave in 2019, up 26.2 percent from 17,665 employees in the previous year.

It is the first time in the nation’s private sector that more than 20,000 male employees went on leave to care for a child in a single year.

Civil servants and teachers, who are not covered by the employment insurance, were excluded from the government’s parental leave data.

The percentage of men in all parental leave takers rose to 21.2 percent last year, marking the first time it has exceeded 20 percent, the ministry noted.

The number of private sector employees on paternity leave stood at merely 502 as recently as 2009 but has since rapidly increased.

Ministry officials explained the government’s campaign for work-life balance, a changing social atmosphere and the introduction of various supplementary policies have all combined to raise the number of employees taking paternity leave.

For instance, the salary for parental leave takers rose to 50 percent of ordinary wages last year from 40 percent in the first three months on leave, while its upper limit was increased from 1 million won (US$860) to 1.2 million won.

In addition, both parents will be allowed to take child care leave at the same time, starting next month.

The government will also push to raise parental leave pay for employed single mothers and fathers in the first half.

By corporate size, meanwhile, the number of employees on paternity leave at businesses with more than 300 employees grew 19.1 percent to 12,503 last year, which accounted for 56.1 percent of the total.

“Paternity leave has been rapidly spreading at small companies,” a ministry official said.