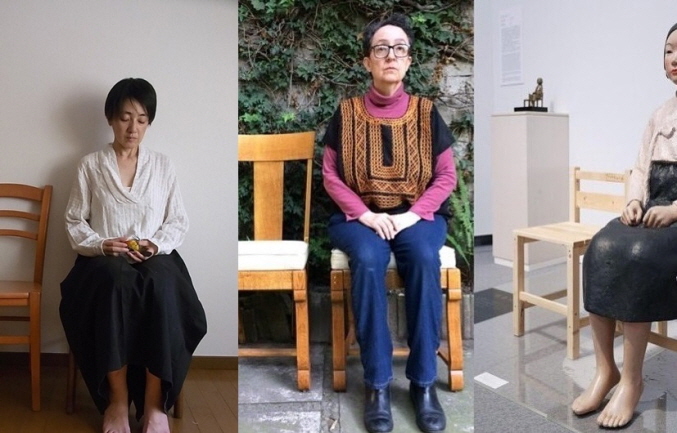 Rosaria Iazzetta, an Italian sculptor and a feminist, tweeted on Sunday photos of women posing as the “comfort women” statue as a protest against Aichi Triennale’s decision to “censor” the artwork. (image: Rosaria Iazzetta)

SEOUL, Aug. 7 (Korea Bizwire) — The host of the Aichi Triennale International Contemporary Art Festival, one of Japan’s largest international arts exhibitions, has shut down one of its sections that displayed the “Statue of a Girl of Peace,” symbolizing wartime “comfort women.”

In response, foreign artists and feminists have staged a protest by becoming the statues themselves.

Rosaria Iazzetta, an Italian sculptor and a feminist, tweeted on Sunday photos of women posing as the “comfort women” statue as a protest against Aichi Triennale’s decision to “censor” the artwork.

An empty chair was placed right next to the women to reflect the statue’s original design intended for the spectators to sit on it and take as much time as they want to look at the statue.

“Let us pose like the statue, and call it the ‘statue of non-freedom of expression,’” Iazzetta said.

Norma Silva, a doctoral student in Mexico majoring in art history and archaeology, also posted a photo of a tribute to the statue on her Instagram account.

“There are more than just South Korean women who were subject to forced mobilization by the Japanese military,” she said in an article titled, the ‘Invitation to Reject Censorship by the Aichi Triennale.’

Netizens across the globe have posted pictures on their social accounts with hashtags #Japanesecensorship, #comfortwomen, and #statueofagirlofpeace, calling on others to join the movement.

Many prior demonstrations against atrocities committed by Japan have paid tribute to the statue of a girl of peace.

Performance artist Yoshiko Shimada staged a protest in front of the Japanese embassy in London in 2012 and in Glendale in last year’s February by dressing up as the statue.

She has been emphasizing the role of Japanese women, who were both aggressors and victims in the war.