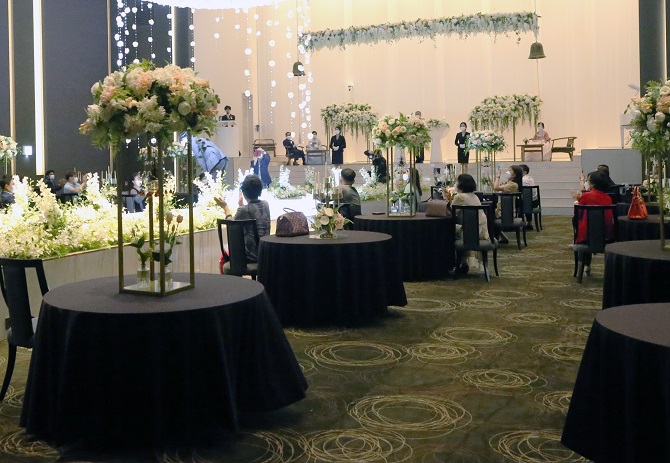 A wedding ceremony is in progress in the southern city of Gwangju in July 2020 under strict social distancing measures. (Yonhap)

SEOUL, Dec. 31 (Korea Bizwire) — With the wedding aisle adorned with a load of white and pink flowers and fancy dining tables decorated for the occasion, 38-year-old Choi Yu-mi’s wedding looked like a typically lavish Korean marriage ceremony, except that the wedding hall held only dozens of guests, not hundreds.

Tables laden with flower decorations, instead of wedding dinnerware, were placed between each guest table, while only four people were allowed at one big round guest table that usually accommodates up to eight people.

Including Choi, her groom, their families, friends and the officiant, only 49 people were present for the wedding ceremony held in late December at a hotel ballroom in southern Seoul, which can sit up to 400 people.

When the couple set out to arrange the wedding ceremony in June, they envisioned it as a normal-sized event with some 250 guests.

The guest list has, however, taken deep cuts as South Korea has ratcheted up social distancing rules to curb COVID-19 outbreaks, and gatherings of only up to 49 people were allowed for indoor weddings when the couple’s marriage took place earlier this month.

As the pandemic has continued nearly for a year, it is deeply affecting how people work, shop, interact with each other as well as the way rites of passage are celebrated.

The stringent social distancing requirements, which were put in place under the second-strongest Level 2.5 stage of the five-tier system for the capital area as of December, dealt an especially heavy blow to Korea’s wedding culture, in which having a big gathering of guests and sharing food take center stage.

“One of the saddest parts was we couldn’t properly treat our guests to dining, which means a great deal in Korean culture,” Choi said.

Due to the ongoing social distancing requirements, she was forced to skip many of the formalities accompanying a wedding, such as hosting meetings with friends to distribute invitation cards or handing out rice cakes as post-wedding presents to colleagues, she noted.

“It has been a nail-biter from the planning of the wedding throughout the wedding itself and beyond because we had been uncertain whether the wedding would be able to take place at all against the background of an upsurge in coronavirus cases (in December),” she noted. 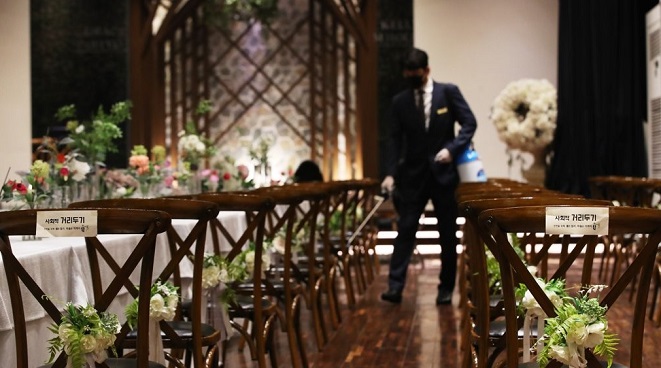 An employee disinfects a wedding hall in Suwon, Gyeonggi Province, ahead of a wedding ceremony on June 7, 2020. (Yonhap)

This month, the country’s average daily coronavirus infections surpassed 800 after hitting a record-high daily tally of 1,241 on Dec. 25.

As the pandemic worsened, the country further prohibited social gatherings of five or more people, effective from Dec. 23 till Jan. 3 in the greater Seoul area, but weddings and funerals were allowed to have an indoor assemblage of up to 49 people as an exception.

The tight 49-person ceiling barely saved Choi from having to cancel her wedding, but it still forced her to let go of many integral elements of a full-scale Korean marriage ceremony.

“I could not even invite all my relatives, and even some of those relatives who were invited could not come because their employers outside of the greater Seoul area advised them against attending weddings in Seoul or its surrounding areas,” Choi noted.

Many friends and colleagues of the couple who arrived after the limited seats at the wedding hall were occupied were ushered into separate rooms to watch the ceremony through a livestream.

They were not served any food or drink in the separate rooms, and the couple prepared two bottles of wine for each guest to make up for the absence of a meal.

The groom also skipped renting a tour bus for his friends and relatives traveling from his hometown in Jeonju, 240 kilometers south of Seoul, owing to the social distancing guidelines in place.

The operator of the hotel also kept special guards at the entrance of the ballroom to keep the assemblage inside below 50, while only guests who were issued designated paper wrist bands were let into the wedding venue.

All were required to remain masked, except for the bride and groom.

In compliance with the ban on indoor gatherings of 50 people or more, the couple also had to leave the wedding room to take a group photo with friends waiting outside.

In the absence of a crowd inside the hall, the wedding took place in a calmer, quieter manner compared with the usually festive, bustling fashion.

“Personally, I don’t enjoy being in the spotlight while many people are watching. But it’s another story (when you have to forgo most of the guests for your wedding),” Choi said.

“If I were someone who wanted a festive wedding, I would have been a lot sadder,” she added.

“Nevertheless, I am glad that my wedding safely took place even in the midst of the COVID-19 pandemic, and a lot more people than I expected came despite the pandemic,” she said.