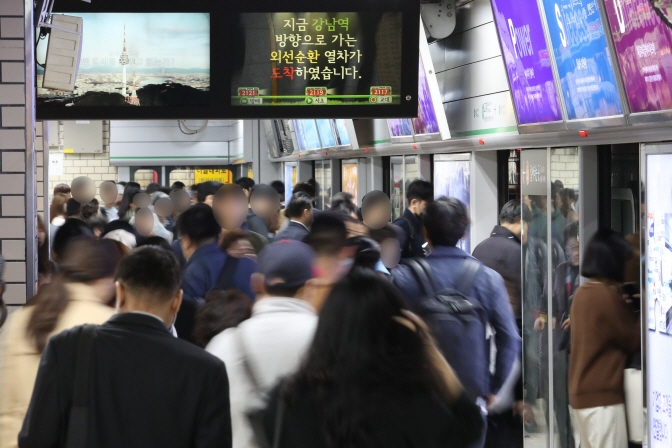 SEOUL, March 2 (Korea Bizwire) — Seoul Metro, the operator of subway lines 1-8, introduced Sunday the types of criminal acts that often occur in subway stations, on platforms and trains and regulations concerning punishment for these offenses.

If a subway passenger spreads false information, including declaring on the subway that one is the novel coronavirus confirmed patient as a prank, he or she could face up to five years in prison or a fine of 15 million won (US$12,500) under Article 314 of the criminal law.

In fact, there was a case in late January of this year in which pranksters played the role of COVID-19 confirmed patients on the Busan subway and at Dongdaegu Station, and then distributed a video clip of their prank.

This type of case constitutes an act of “distributing false information and obstructing work with dignity and power” because it creates great anxiety for citizens.

In addition, one-man protests at subway stations could also be subject to legal punishment.

The one-man demonstration itself is not subject to punishment, but violators can be punished if the act goes beyond a mere expression of opinion and causes a disturbance in the flow of human traffic.

Violence and abuse on the subway are also illegal. In particular, if the victim is an employee, offenders can face severe punishment, including up to five years in prison or up to 50 million won in fines, according to the Railroad Safety Act.

Meanwhile, taking the subway with a pet is not allowed in principle. This is stipulated in the terms and conditions of the public corporation and the Minor Offenses Act.

However, as an exception, guide dogs with proper tags and small pets that can be placed in a cage and do not emit any smell are allowed to ride with their owners.

Carrying a bicycle is allowed, but one cannot ride it in the subway. Bicycles are also legally equivalent to “cars.”

Personal mobility devices such as electric scooters and electric wheels, including Segways, that have recently been widely distributed, are categorized as motor bicycles under the Road Traffic Act, and thus are treated like bicycles.