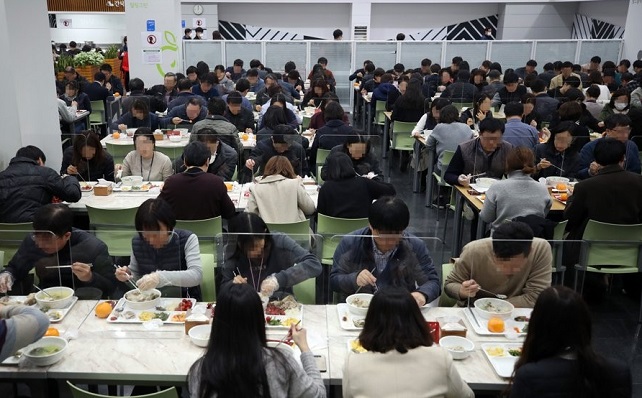 Acryl boards are set up on the table between diners at a cafeteria in Seoul City Hall in Seoul on March 23, 2020, to prevent any possible COVID-19 infections between them. (Yonhap)

SEOUL, July 21 (Korea Bizwire) — An experiment has showed that the installation of transparent partitions is effective in preventing the spread of infectious diseases.

The state-run Korea Institute of Energy Technology Evaluation and Planning (KETEP) revealed on Monday that it carried out an in-house experiment that confirmed that a transparent partition with a height of more than 90 centimeters can block most droplets.

As part of the experiment, a substance was sprayed onto a transparent partition installed on a table, and the quantity of droplets falling on the opposite side of the table was measured.

After varying the height of partition and sprayer, the KETEP confirmed that a partition with a height of over 90 centimeters could block more than 99.9 percent of droplets.

“If transparent partitions with a height of over 90 centimeters are installed in restaurants, bars and cafes, of which there are estimated to be more than 800,000 nationwide, it would greatly contribute to preventing the spread of infectious diseases and reinvigorating the local economy,” the institute said.

“One plausible option is to develop foldable-type transparent partitions that can be easily moved and disinfected, and then supply and collect them in the same way as wet wipe delivery services work.”