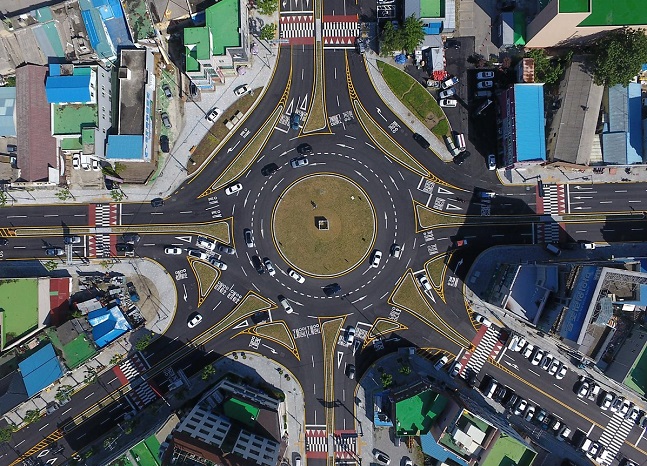 This photo provided by Gangneung city government shows a roundabout in the city.

SEOUL, March 30 (Korea Bizwire) — The number of traffic casualties on roads with roundabouts fell by about one third after roundabouts were installed, a government data showed Monday.

On Monday, the Ministry of the Interior and Safety and the Ministry of Land, Infrastructure and Transport revealed the results of an analysis of the operational performance of roundabouts over the past ten years.

A roundabout refers to a circular intersection where drivers travel counterclockwise around a center island. As of the end of last year, there were a total of 1,564 roundabouts in South Korea.

The Korea Transport Institute analyzed traffic accident data for the 476 roads where roundabouts were installed between 2010 and 2018.

The institute compared the changes in the number of traffic accidents from three years before installation to one year after installation.

In particular, the number of deaths plunged by 76 percent from 17 to 4, with the number of seriously injured casualties falling from 421 to 257.

In the meantime, the average amount of time drivers spent to pass the intersection was shortened by about 5.3 seconds from 25.2 seconds before installation to 19.9 seconds after installation.

Government officials explained that the installation of roundabouts contributed to shortening the intersection passage time since they require no standby time for the change of traffic signals, adding that roundabouts lead to a natural flow of vehicles, thereby reducing traffic accidents.