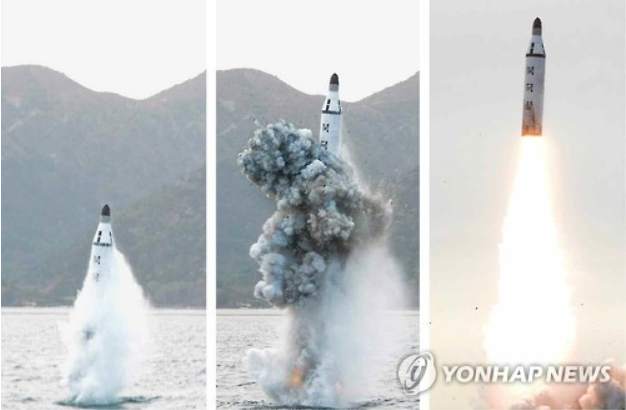 The Joint Chiefs of Staff here said the flight test may have been a failure because the flight distance fell far short of the SLBM range of 300 km. (image: Yonhap)

North Korea’s SLBM test last week provided the latest sign that the country’s SLBMs may pose an increasingly tangible threat to the country’s security, requiring Seoul to come up with a plan to deal with the communist country’s submarine force when they are moored, sailing and launching missiles.

On Saturday, the reclusive country fired an SLBM from a 2,000-ton submarine in the East Sea, the third such move since it announced the first sub missile ejection test in May 2015.

After soaring from the water, the ballistic missile flew some 30 kilometers, a flight long enough to demonstrate that the country has made solid progress from the initial ejection test.

But the distance of the flight fell far short of the range of a workable SLBM that can fly several thousand kilometers.

Evaluations varied on whether it was a success or failure, but experts agreed that with the latest test, the actual deployment of North Korea’s SLBM could take place within the next three to four years.

“If an SLBM flew 30 kilometers in its initial flight tests, it means progress has been made to some extent,” one expert well versed on submarine technology said.

If successfully deployed, North Korea’s SLBM is sure to be another major source of security threats to South Korea and the United States on top of the North’s intercontinental ballistic missiles which, if completed, could carry a nuclear warhead as far as the U.S. mainland.

The clandestine nature of SLBMs makes it far harder to detect and intercept them in comparison with the traditional ground-based ballistic missiles which have launches that are easily detectable from the initial preparation stages.

With the capacity to survive an enemy’s devastating attacks on land and launch retaliatory second strikes on an adversary, SLBMs are considered a major pillar of a nuclear power’s weapons capabilities.

The growing anxieties sent South Korea scurrying to speed up the fortification of its air defense and counter-submarine defense systems.

“Our military is girding itself up by integrating the military’s own defense systems and counter-submarine defense programs with the South Korea-U.S. alliance’s counter-missile strategies and deterrence plans,” Defense Ministry spokesman Moon Sang-gyun said a day earlier.

At the center of the defense plans is South Korea’s three-stage counter-submarine system designed to detect and track North Korean submarines’ movements from home bases through their deployment at sea and to finally intercept ballistic missiles that are launched from the submarines.

Within the next several years, South Korea plans to launch five surveillance satellites of its own into orbit in an ambitious defense project to give the country its own submarine detection capability.

Under the project, the military plans to launch its first satellite in 2020 and four more satellites over the following two years, according to the country’s defense policy plans.

The second part of the deterrence package centered on tracking the subs at sea mobilizes the Navy’s three Aegis Combat System-equipped warships that will undertake missions to hunt down North Korean submarines once they leave port.

South Korea plans to add three more Aegis combat vessels by 2027 to beef up its surveillance, along with additional ground-based anti-ballistic radar systems, according to defense officials.

The Navy’s nine 214-Type 1,800-ton submarines would join the tracking operations together with a fleet of Lynx anti-submarine helicopters and maritime patrol airplanes equipped with sonar and magnetic anomaly detectors.

The Navy is currently seeking to acquire three more 214-Type submarines and eight Wildcat combat helicopters to beef up its fighting capability.

In addition, the Navy will introduce a new fleet of nine 3,000-ton submarines by the 2020s under the indigenous submarine project known as KSS III.

The final interception phase encompasses the military’s PAC-3 anti-ballistic interception system as well as the indigenously developed Hyunmoo missiles that could launch preemptive attacks on submarines at port.

In one or two years’ time, North Korea may be able to deploy SLBMs with a range of about 500 km against South Korea about midway through its pursuit of the 2,000-km range, military observers said.

“North Korea is predicted to bring its SLBM technology to the level that could pose practical threats to the U.S., but it would also carry multiple purposes,” a military expert said, indicating that the deployment could take place far earlier than expected.