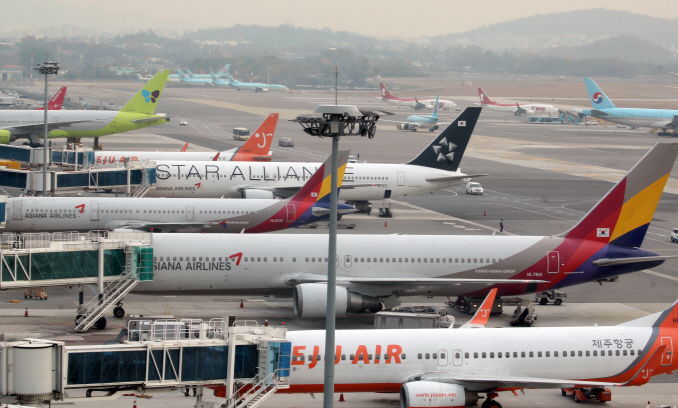 A line of airplanes are parked at Incheon International Airport. (Yonhap)

SEOUL, Jan. 11 (Korea Bizwire) — South Korea, China and Japan have agreed to accept a United Nations aviation agency’s proposal for an agreement critical for the safety of flights near Korea’s southern resort island of Jeju, the transport ministry said Monday.

South Korean and Japanese air traffic controllers have been directing north-south flights and east-west flights, respectively, in the “Akara corridor,” which is part of South Korean airspace.

Japan has shepherded flights between Shanghai and Japan on behalf of China.

Last year, the International Civil Aviation Organization (ICAO) suggested South Korea take over Japan’s role and guide flights in and out of Shanghai on behalf of China.

“The three countries have recently agreed to gradually follow the ICAO’s suggestions from March 25,” the Ministry of Land, Infrastructure and Transport said in a statement.

“The new airway and aviation control system will significantly improve the safety of flights in the Akara corridor and better cope with rising flight demands in the region,” Kim Sang-do, deputy minister for civil aviation at the ministry, said.

The Akara corridor has been mainly used by airlines from the three countries, the United States and Canada. The number of flights that used the corridor soared to 212,000 in 2019 from 36,000 in 1983, the ministry said.

Seoul, Tokyo and Beijing made the current air traffic control arrangements in 1983 when airplanes made only dozens of flights a day in the Akara corridor.

As the number of flights in the Asia-Pacific region has risen sharply on higher travel demand, the ICAO urged them to streamline traffic control in the corridor.

South Korea had called on Japan to actively join multilateral talks to enhance the safety of flights in the air corridor that stretches over three offshore points — Akara in China, South Korea’s flight information region (FIR) near Jeju Island and Japan’s Fukue Island.

In the corridor, which is 519 kilometers long and 93 km wide, airlines use eight altitudes to avoid collisions.

South Korean and Japanese air traffic controllers operate on different radio frequencies, raising the risk of potential collision due to difficulties in communications with pilots, as well as turbulence and bad weather.