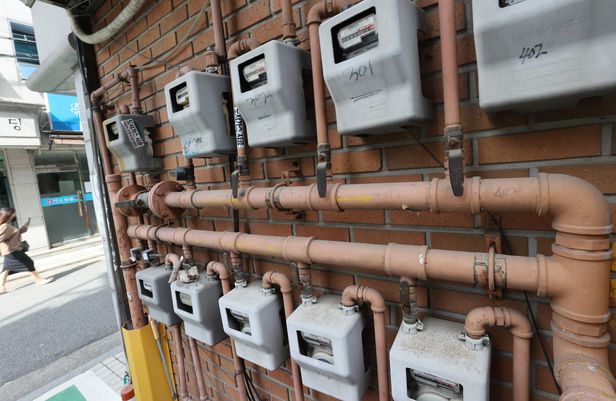 Gas meters are installed at a multi-housing area in Seoul. (Yonhap)

Starting in October, natural gas prices for households and commercial use will be hiked by 2.7 won (US$0.002) per megajoule, the ministry said in a press release.

Natural gas prices for households will climb 15.9 percent, with the growth rate for commercial use ranging from 16.4 percent and 17.4 percent.

“The hike reflects soaring global natural gas prices and a recent surge in the won-dollar exchange rate,” the ministry said.

International gas prices have been trending high amid increased uncertainty surrounding the global liquefied natural gas (LNG) market, which stems from the war in Ukraine and disrupted gas supplies to Europe, it said.

According to the ministry, Asian spot natural gas prices soared to $47 per one million Btu in the third quarter of the year, compared with $2.5 in July 2020.

Btu, or the British thermal unit, is a traditional unit of energy that is approximately the amount of energy needed to heat 1 pound, or 0.454 kilograms, of water from 39 degrees Fahrenheit to 40 F.

The raise is also inevitable due to a jump in uncollected gas bills, which could disrupt the country’s LNG imports, the ministry added.

The move is feared to add upward pressure on the country’s inflation. In August, South Korea’s consumer prices rose 5.7 percent on-year, slowing from a 6.3 percent surge in July.