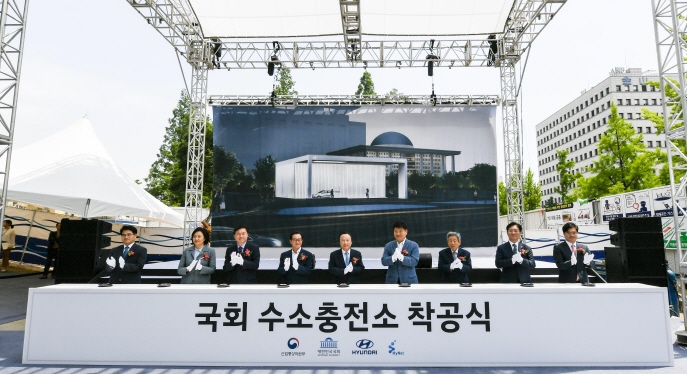 Government officials and Hyundai Motor executives participating in the groundbreaking ceremony of a hydrogen charging station at the National Assembly in Seoul on May 30, 2019. (Yonhap)

SEOUL, Oct. 31 (Korea Bizwire) — South Korea on Thursday announced a plan to cut the production costs of hydrogen to about a third of current costs by 2040 in a move to make it a viable alternative to the fossil fuels blamed for global warming.

The road map — outlined at the latest science-technology ministerial meeting in Seoul — calls for lowering the cost of making a kilogram of hydrogen to around 3,000 won (US$2.60) in 2040 from the current cost of about 10,000 won, the Ministry of Science and ICT said.

The move is in line with South Korea’s efforts to boost the burgeoning hydrogen economy.

Hydrogen has emerged as one of the alternatives to fossil fuels amid global campaigns to reduce emissions of greenhouse gases, which scientists say are to blame for global warming.