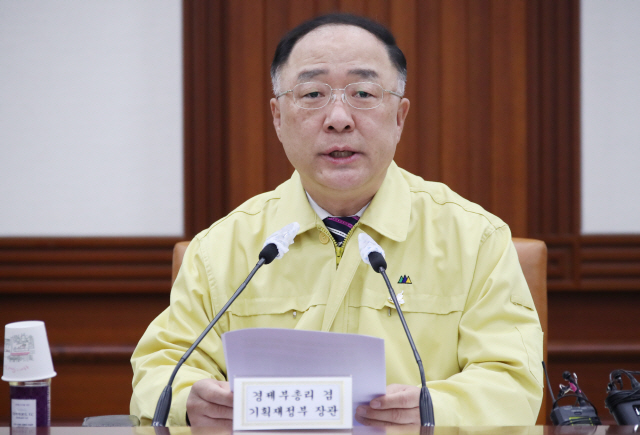 Finance Minister Hong Nam-ki speaks at a meeting with economy-related ministers on May 28, 2020. (Yonhap)

SEJONG, May 28 (Korea Bizwire) — South Korea will set up a guarantee fund of 500 billion won (US$405 million) to provide more loans to auto parts companies that have been hit by the coronavirus pandemic, Finance Minister Hong Nam-ki said Thursday.

The fund, which will be financed by the government and carmakers, will provide guarantees for loans for auto parts firms, Hong said.

The public sector will buy 9,500 cars by the end of September to prop up auto parts firms, Hong said.

To boost private consumption, the government will open a nationwide shopping festival on June 26 for a two-week run, Hong said.

In May, South Korea’s consumer sentiment rebounded from an 11-year low as the nation eased social distancing rules.

Hong said the rebound in consumer confidence is a “meaningful signal” for an economic recovery.

In the first 20 days of this month, exports sank 20.3 percent on year amid the shock from the coronavirus pandemic, customs data showed Thursday.

The pandemic has disrupted trade and halted production around the globe, with a rising number of countries fully shutting their borders.

Hong said the government will draw up plans to help companies win more overseas orders and bring their overseas plants back to South Korea.

South Korea has pledged stimulus packages worth 250 trillion won, or 13 percent of its gross domestic product, to cushion the economic blow from the pandemic.

The nation’s economy shrank 1.4 percent on-quarter in the first quarter of this year, marking the sharpest quarterly contraction since the last three months of 2008.

As part of measures to support auto parts firms, the government will suspend a probe into their imports for one year, Vice Finance Minister Kim Yong-beom told reporters.

The suspension is aimed at easing burdens of auto parts firms as exports of cars plunged, Kim said.