The three countries have been working on the signing of an agreement on sharing military secrets since May, when they agreed to launch working-level discussions during their defense ministers’ talks in Singapore. The conclusion comes two years after a bilateral information-sharing pact between Seoul and Tokyo was ruptured due to fierce public criticism in South Korea.

“The three nations have agreed to sign the trilateral deal on Monday to share their intelligence on North Korea’s nuclear and missile threats,” an official from Seoul’s defense ministry said, requesting anonymity.

“Sharing of intelligence will be strictly limited to the North’s nuclear and missile programs in such various forms as documents, photos and digital electronic data. We will exchange secrets with Japan not directly but via the U.S.,” he noted.

No separate ceremony will take place, with the vice ministers of each country to sign the arrangement, which will make it valid, he said, adding that no additional domestic process for approval is necessary as the subjects of concluding the envisioned pact will not be the three nations but their defense ministries. 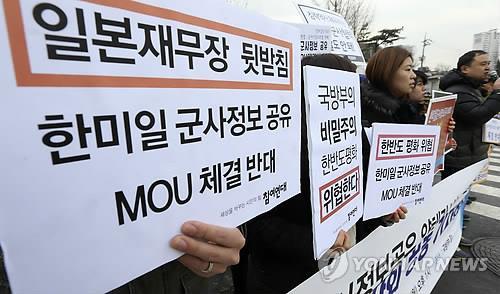 Civic activists hold a protest in Seoul on Dec. 22, 2014, against ongoing moves among South Korea, the United States and Japan to sign a trilateral pact to share their military intelligence. (Yonhap file photo)

The expected deal comes as North Korea’s missile and nuclear programs are raising concerns not only in South Korea but in the greater region and beyond.

Pyongyang has recently threatened to carry out another nuclear test in protest of a United Nations resolution against its human rights abuses. Recent reports have also indicated the country has advanced its technology to miniaturize nuclear warheads that could be mounted on its long-range ballistic missiles.

The bellicose regime has conducted three underground nuclear detonations since 2006, including its most powerful one with a uranium-based device in February 2013. This year, it also fired off 111 rockets, including mid-range Rodong missiles.

“We believe that the arrangement will be very effective in deterring the communist country from launching provocations in the first place,” the ministry official said.

“The cooperation between the three nations is expected to boost the quality of the intelligence on North Korea, which will enable the allies to respond to possible provocations in a swifter fashion,” he noted.

The scope of military information to be shared among the three will be confined to intelligence on threats from North Korea, the officials here stressed, in an apparent move to circumvent expected opposition from the public, which has opposed any military cooperation with Japan, its former colonial ruler.

The Korean Peninsula was ruled by Japan from 1910-45, and resentment over its atrocities, such as the forced sexual enslavement of Korean women for its troops, still runs deep among South Koreans, with many of the historic issues remaining unresolved.

Seoul and Washington have a bilateral military intelligence-sharing agreement, as do the U.S. and Japan. Seoul and Tokyo had worked to sign such a deal in 2012, but the deal fell apart at the last minute due in part to negative public sentiment in South Korea.

“The arrangement does not mean sharing military secrets in a broad fashion,” said the official. “Rather than directly sharing the sensitive information with Japan, we will give our intelligence first to the U.S. and the tips will then be shared with Japan upon our approval, and vice versa,” he noted.

While the specifics about information sharing will be determined through further discussions later, the three-nation arrangement will be legally binding as it is based on the Seoul-Washington and Washington-Tokyo treaties on sharing confidential information, according to the official.

In response to criticism that the agreement will pave the way for South Korea to join the U.S.-led missile-defense (MD) system participated in by Japan, Seoul officials stressed the government’s push for its own missile shield.

“We would share military secrets with the U.S. and Japan, but we will act on our own under the current mechanism of the Korea-U.S. partnership when we need to respond to possible North Korean provocations,” another defense ministry official said on condition of anonymity.

Rebuffing a U.S. call to join its MD system, which is widely seen as intended to keep China in check, Seoul has been building the Korea Air and Missile Defense System (KAMD).

Asked about China’s possible opposition to the three-nation pact, the Seoul official said nothing would come before national security.

“We’ve not received any comments from China regarding the issue, and we don’t predict what reaction China would take,” the official said. “We’ve decided to share the intelligence with the U.S. and Japan for our security interests that cannot be compromised in any case.”

In July 2012, South Korea proposed the signing of an agreement on exchanging military secrets with China and has been waiting for Beijing’s response.

So far, South Korea has signed similar information-sharing arrangements with 29 countries, including Russia.