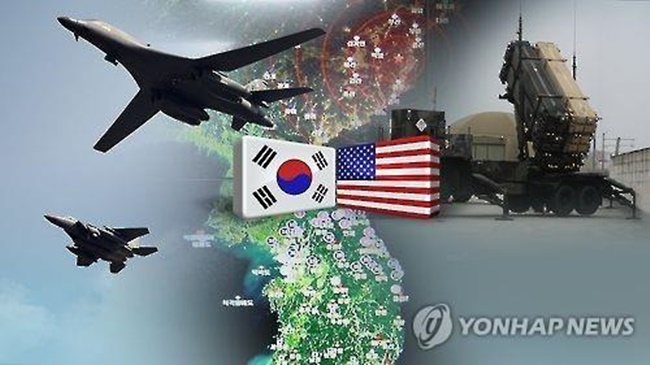 An image of South Korea-U.S. alliance in a photo provided by Yonhap News TV. (Image: Yonhap)

The two sides are scheduled to open the two-day Korea-U.S. Integrated Defense Dialogue (KIDD) meeting in Washington D.C. on Wednesday (local time), according to the Ministry of National Defense.

It would be their first KIDD session since the launch of the Donald Trump administration.

“There will be wide-ranging discussions on pending alliance issues,” the ministry’s spokesman Moon Sang-gyun told reporters.

In a separate press release, the ministry said the allies will jointly assess the recent North Korea situations, especially regarding its nuclear and missile programs.

Other agenda items include policy coordination against the North’s provocation, a review of the allies’ extended deterrence strategy and appropriate conditions for the transfer of wartime operational control of South Korean troops from Washington to Seoul, added the ministry.

The ongoing deployment of an advanced U.S. missile defense system, called THAAD, is expected to be discussed as well.

South Korea’s delegation will be headed by Wee Seung-ho, deputy minister for policy, and his American counterpart will be David F. Helvey, assistant secretary of defense for Asian and Pacific security affairs.

Launched in 2011, the biannual KIDD is a comprehensive defense meeting between the allies.