“As the Korea-China relations come of age, the two nations must discuss sensitive issues in an open-minded manner. With regard to the issues of North Korea, North Korea’s nuclear program, unification and security as well as North Korean defectors and fishing orders in the Yellow Sea, the two nations must exchange opinions in a more candid manner and resolve them in a creative manner.”

“By frequently making contact with China and the U.S., we should make efforts not to undermine our issues. In the middle of cooperation between the U.S. and China, we need to let our interests have a mutual synergy effect.” 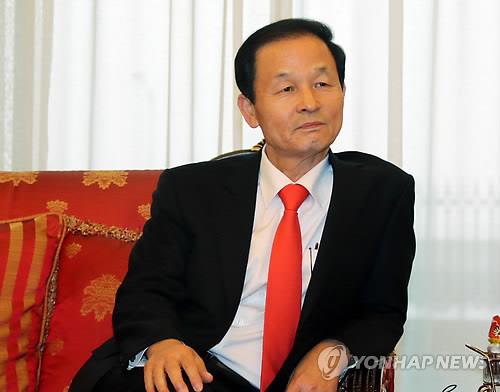 BEIJING, March 31 (Korea Bizwire) — South Korea and China should have “more candid” discussions about a range of sensitive issues between the two nations, including North Korea and regional security, the new South Korean ambassador to China, Kim Jang-soo, said Tuesday.

Kim, a 67-year-old former defense minister who headed the National Security Council at the presidential office of Cheong Wa Dae until May last year, took up the post earlier in the day at a time when tension between Seoul and Beijing is brewing over a possible deployment of an advanced U.S. missile defense system in South Korea.

Upon his arrival at the Beijing airport earlier in the day, Kim said he will spare no efforts to forge close cooperation with China but stopped short of expanding upon sensitive issues between the two nations.

The U.S. has said it is considering deploying the missile defense system, known as the Terminal High-Altitude Area Defense (THAAD), in South Korea, home to about 28,500 American troops, to better cope with the growing threats of North Korea’s nuclear and missile capabilities.

Since graduating from the Korea Military Academy in 1971, Kim had served in various capacities in the South Korean Army. He was the Army chief of staff in 2005 and the defense minister from 2007 to 2008.