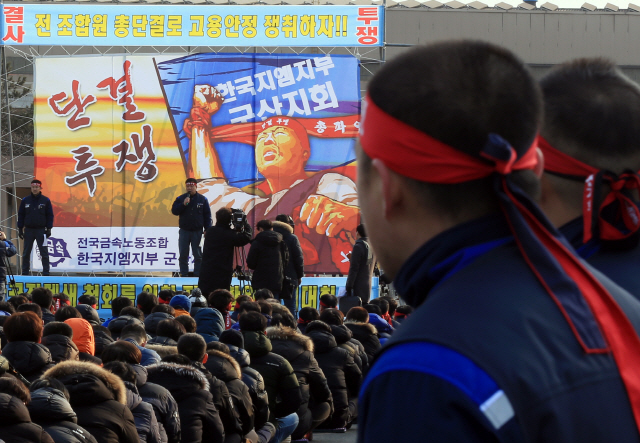 SEOUL, Feb. 27 (Korea Bizwire) — The South Korean government will have to make a tough decision on whether to inject fresh funding into General Motors to help continue its Korean operation amid heated debates over whether it would be a lifeline for a sustainable business or a painkiller for recurring headaches, officials and policymakers said Tuesday.

The Detroit-based automaker is seeking financial support and tax benefits from the South Korean government and its shareholder, the state-run Korea Development Bank, as it moves to decide the fate of three production lines in the country after deciding to shutter its underutilized Gunsan plant.

GM proposed a $2.7 billion debt-for-equity swap and $2.8 billion in investment over the next 10 years and agreed to cooperate with an audit into its financial situation in a series of meetings with Korean officials and lawmakers last week, but it has not submitted a formal restructuring plan.

The Korean government said it will decide on fresh funding based on the audit into GM Korea’s financial situation and long-term business plan, but suspicions remain that GM may use the fund for its short-term survival and eventually pull out of the country as shown in other cases.

GM has a history of using jobs and the local economy as leverage to force governments around the world, including Australia and Europe, to shoulder the cost for its corporate restructuring.

“It is true that there are various opinions about whether the Korean government should provide support to normalize GM Korea’s operation,” a senior official involved in negotiations with GM said. “There is consensus that the government should make a decision after figuring out if GM headquarters has a true willingness to normalize its Korean unit.”

South Korea has been a low-cost hub for compact cars once offered in Europe, but it has become unprofitable in recent years following GM’s decision to pull Chevrolet out of Europe. GM Korea has logged massive losses since 2014, reporting about 900 billion won (US$839 million) in net losses last year.

The GM issue has come to the fore at a politically sensitive time as regional elections are just four months away, while the administration of U.S. President Donald Trump is adding pressure on the South Korean government at free trade agreement talks to cut trade deficits and bring more manufacturing jobs back for Americans.

Policymakers said the government should not hastily make a decision for political expediency as it could lead to a waste of taxpayers’ money for a foreign company.

“GM headquarters, GM’s labor union and the Korean government should come up with measures based on economic grounds, not political reasons, to improve GM Korea’s structure to produce long-term profits,” Rep. Jung You-sub of the main opposition Liberty Korea Party said. “GM headquarters will have to improve its management transparency, and GM’s labor union should give up its privilege and share pains during the wage negotiations currently underway.”

Some called on the government to prepare for the worst case scenario if the automaker doesn’t provide a feasible long-term plan.

“The government should engage in negotiations to normalize GM Korea’s sustainable business,” Rep. Sim Sang-jeung of the minor leftist Justice Party said. “But the government will also have to simultaneously draw up strategies to foster eco-friendly, next-generation cars in preparation for GM’s potential exit from the nation.”

According to last week’s survey conducted on 500 adults by Seoul-based pollster Realmeter, 55.5 percent of respondents said the government should provide support only when GM proposes a reasonable restructuring plan, while about 30 percent opposed providing financial aid to a foreign company.

GM Korea employs about 16,000 workers and supports another 140,000 jobs at its local contractors, according to the South Korean trade ministry.