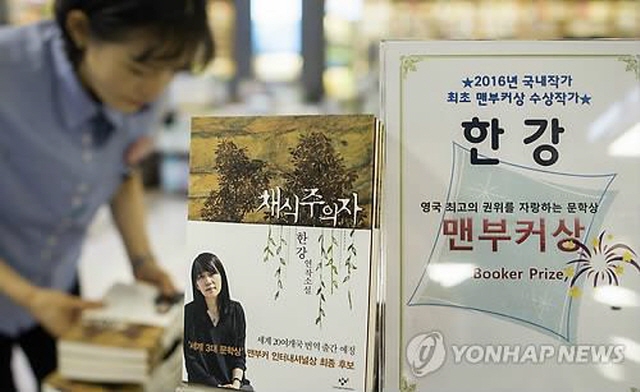 SEOUL, May 17 (Korea Bizwire) — South Korean author Han Kang has been receiving renewed attention in the local book market Tuesday on news that her novel “The Vegetarian” won the 2016 Man Booker International Prize.

“The Vegetarian” was sold out at the bookstore around noon, and visitors who couldn’t get their hands on the award-winning book bought her other works instead.

“Inquiries about her books surged in online and offline stores,” said an official from the bookstore.

Tallies from the local bookstores indicate that more than 12,000 copies of the Man Booker winner have been sold after the news broke early in the morning in Korea.

An official from another online bookstore Aladin, popular for selling secondhand books, said “During 9-11 a.m. when the media intensively reported about the book, the sales speed almost hit a record with seven copies per minute.” As of 4 p.m., the online bookstore sold about 3,000 copies, more than 30 times that of yesterday.

According to the company, the average age of the buyers is the early 40s, reflecting the fact that people aged over 50, older than the usual age brackets of frequent buyers in their 20s and 30s, joined the buying spree.

In the days to come, the local book industry is likely to tap into Korean readers’ interest in the novelist to boost book sales.

Yes24 has already started a marketing push for Han Kang’s works. The company will give presents to readers who leave a congratulatory message for the author on the company’s blog.

Kyobo also plans to embark on a sales campaign in both its offline and online stores.