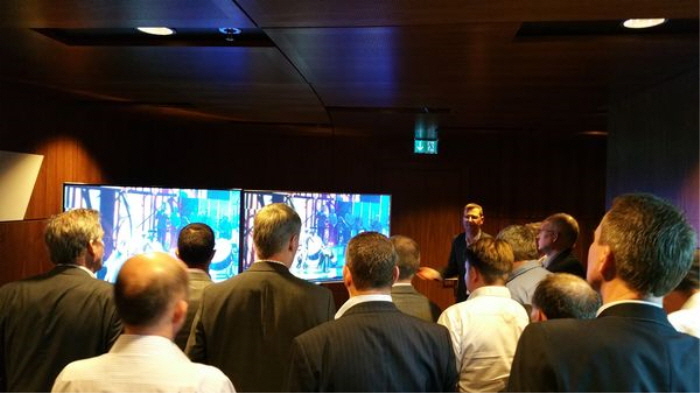 Samsung rehearsed a transmission of digital content that has adopted the High Dynamic Range (HDR) technology, to its latest Super UHD TV model via a satellite. (image: Samsung Electronics)

SEOUL, May 8 (Korea Bizwire) — South Korean tech giant Samsung Electronics Co. said Friday it has demonstrated a digital transmission of a high-imaging ultra-high definition (UHD) TV in Luxembourg, as it seeks to pave the way for setting global standards with the advanced visual technology.

Samsung rehearsed a transmission of digital content that has adopted the High Dynamic Range (HDR) technology, to its latest Super UHD TV model via a satellite during the SES Industry Day, a two-day event held for telecom and broadcasting companies in Europe, the company said.

“We hope that the first satellite transmission of the HDR UHD broadcasting on Samsung’s SUHD TV will be the starting point for an expansion of its infrastructure and vitalizing the technology,” Seo Young-joo, the head of Samsung’s video display division, said.

HDR imaging is a type of visual technology that was originally applied to cameras. It brings a far greater quality of luminosity than existing digital images, as it aims to present an image as if it were seen through the human eye.

Tech firms and broadcasting companies are trying to expand the adoption of the HDR into their devices and digital content, as it is considered the next-generation technology that will attract viewers worldwide.

The UHD Alliance, a global partnership consisting of major consumer electronics brands and content distributors, have picked HDR technology as a key driver of growth in the UHD ecosystem.

According to market tracker DisplaySearch, the global UHD TV production is forecast to rise to 30 million units this year, up from 12 million units a year ago.

Samsung Electronics held the largest share of 34.3 percent in the UHD TV market as of end-2014.