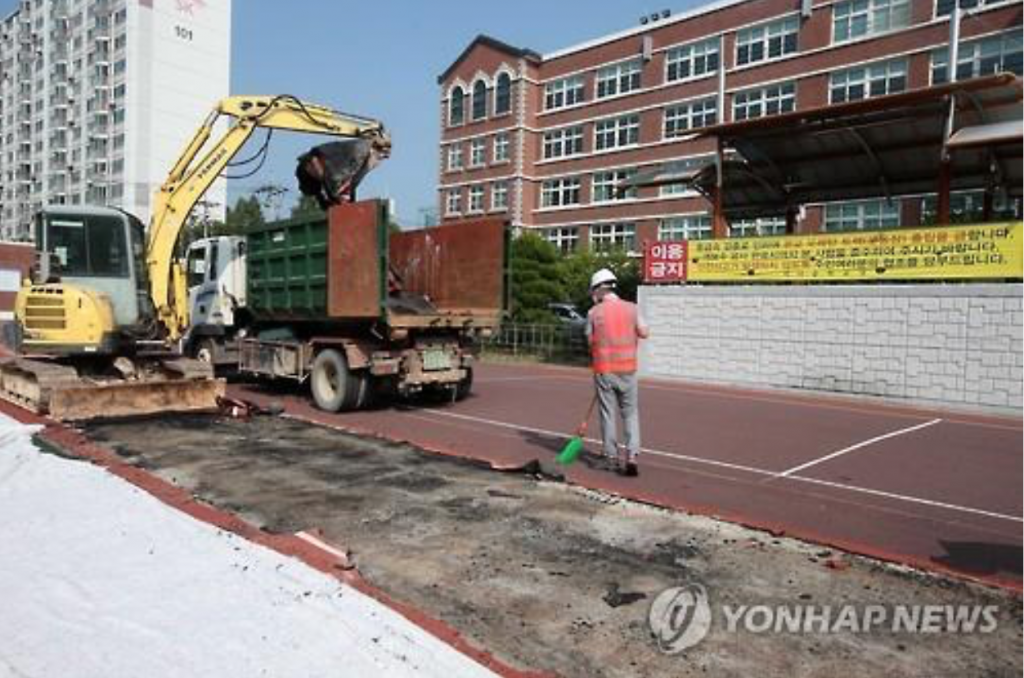 A school in Gwangju tears down its lead-contaminated urethane track. (image: Yonhap)

SEOUL, Aug. 17 (Korea Bizwire) – Urethane running tracks at Korean elementary, middle, and high schools have been at the center of controversy, with many having been found to contain unhealthy levels of lead. And with the Ministry of Environment revealing that 64 percent of 2,763 schools inspected were found to have urethane tracks or playgrounds that exceeded the government lead standard (9mg/kg), the concerns have only grown in recent weeks.

Following further government analysis of the matter, the Ministry of Education revealed Tuesday that schools from eight cities and provinces across the country have so far expressed their will to replace current urethane tracks with loam-based playing fields. And although the survey of the remaining nine cities and provinces is ongoing, the ministry said that a large majority will follow suit.

In fact, the latest announcement is contradictory to a July report that stated 1,459 out of 2,763 wished only to replace the tracks with safer urethane tracks, and only 216 schools at the time expressed their desire to adopt loam playing fields. The ministry, at the time, said that environmentally-friendly urethane was preferred by school officials and parents.

But following a later report that pointed out safety standards for phthalate, which are known to have endocrine-disrupting properties, are missing in the current KSA (Korea Standards Association) standards, public opinion shifted towards replacing urethane altogether. According to the ministry, only lead, mercury, cadmium, and hexavalent chromium are subject to KSA safety evaluation at the moment.

“No matter how eco-friendly urethane is, it’s still a chemical compound, and for this reason, more schools will switch over to dirt playgrounds,” said an official from the Ministry of Education. “Schools with the highest concentration of heavy metals will undergo the substitution process first.”

However, soil fields have their own drawbacks, mainly for causing dust clouds and forming puddles after rain. In order to overcome such problems, the Seoul Metropolitan Office of Education is carrying out research efforts with Seoul National University and is considering the use of a loam-silica mixture for the new playgrounds, while installing stone-filled drains underneath the ground.

“The loam-silica mixture and the drains will reduce the rate of dust clouds by up to 60 percent, and allow rapid 30-minute drainage,” said a city official. “We plan on sharing out research findings with other cities and provinces.”

The ministry also added that for schools that still wish to maintain urethane tracks, their replacement will have to wait until the new KSA standards that include phthalate are announced at the end of the year.

“Considering various legal procedures and discussions with related businesses in amending the standards, their construction plans will likely be confirmed towards the end of the year,” said the ministry.