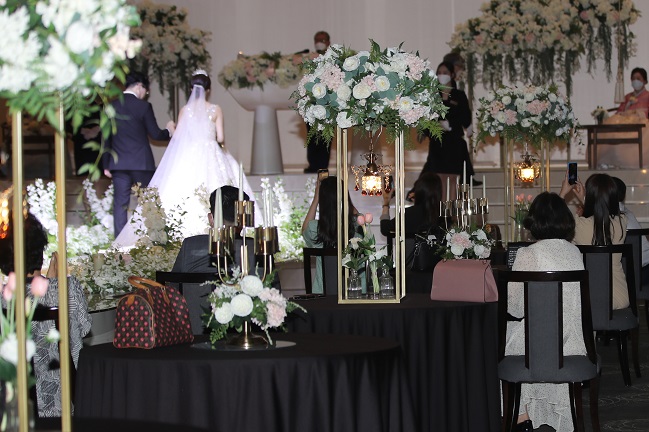 SEOUL, Aug. 9 (Korea Bizwire) — The self-employed and soon-to-be-married couples are raising complaints following the announcement by medical authorities that religious facilities would be allowed to accommodate up to 99 people for offline activities during level 4 social distancing measures.

Previously, religious facilities were limited to gatherings of 19 people, regardless of accommodation capacity.

However, medical authorities seem to have accepted calls from the religious community to alleviate restrictions.

The self-employed and soon-to-be-married couples are calling it an ‘unfair decision.’

“If we do it as the churches say, then wedding halls should also be able to set their accommodation capacity based on their size,” said a 30-year old groom-to-be surnamed Hwang who already postponed his wedding from July to November.

“It is unacceptable that wedding halls still can’t welcome more than 49 people.”

Self-employed business owners, too, responded angrily that “the government requires sacrifices from small businesses,” when to them, it’s “a matter of survival.”

“Should we always remain victims, if we don’t have as much power as the religious community?”

Members of the MZ Generation, born between the 1980s and 2000s with relative disinterest in religion, have also raised complaints.