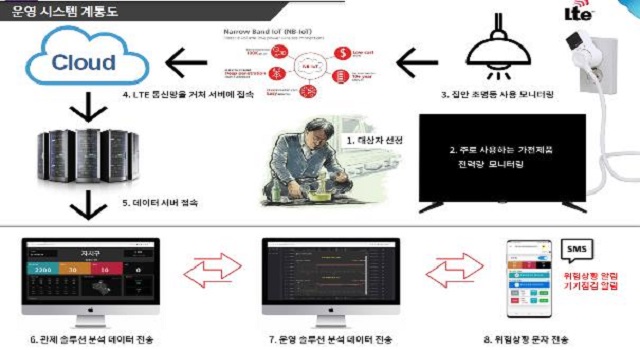 This image provided by the Seoul city government shows the mechanism of the city’s IoT-harnessed monitoring system for single-person households.

Since late 2020, the city has been operating the “smart plug” program, under which the amounts of electricity used by those who live alone are monitored through internet connections to their televisions, microwaves or other frequently-used home appliances.

In the event of a sudden drop in a person’s electricity use, the city’s social welfare officials get alerts to immediately inquire after or visit the person so as to ensure the person’s safety.

The city said a total of 2,709 one-person households, mostly at advanced ages with high risks of unattended deaths, have so far joined the program, and 2,000 more single households will have the smart plug monitoring network connected into their home appliances this year.

The city will first assess the level of demand for the program by May 9 and then select beneficiaries, with priority given to elderly people in single-person households, the officials said.

On a total of 154 occasions so far, people under the program have been given help, most of them under waning health conditions due to alcohol abuse or in need of aid to move or feed themselves, according to the city.