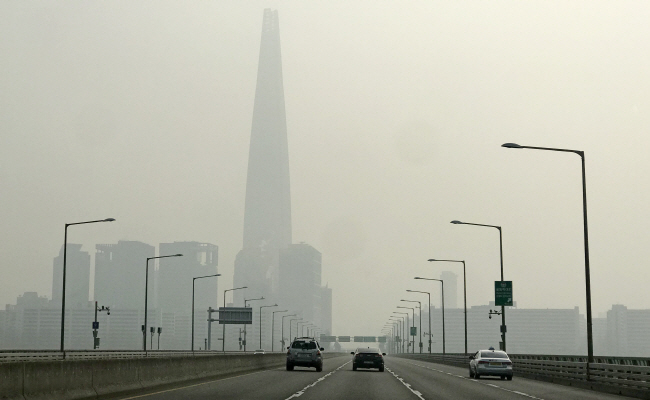 SEOUL, Jan. 14 (Korea Bizwire) — Seoul was hit by a record-high level of ultrafine dust, known as a class one carcinogen, on Monday, as most of South Korea was blanketed by extraordinarily heavy levels of choking dust particles for the fourth consecutive day.

The Ministry of Environment has decided to extend a set of emergency measures aimed at reducing fine dust in Seoul, Incheon and Gyeonggi Province through Tuesday. It would be the first time for the government to implement the system in the metropolitan area, which has around 20 million residents, for three consecutive days.

Under the step, vehicles with license plates ending in even numbers and used by public offices, will be restricted from operating on Tuesday. And the operation of 2.5-ton diesel cars or bigger ones, registered with metropolitan governments before 2005, will be limited.

The daily average level of ultrafine particles, smaller than 2.5 micrometers in diameter, in Seoul surged to 118 micrograms per cubic meter as of 3 p.m., the highest figure since the government began taking such measurements in 2015, according to the state-run National Institute of Environmental Research.

The previous daily record of ultrafine dust in the capital was set on March 25 last year, when the figure reached 99 micrograms. The institute said the density of harmful ultrafine dust particles is unlikely to go down over the rest of the day.

The institute explained that the inflow of external fine dust from China and other locations has combined with locally generated pollutants amid stagnant air over the Korean Peninsula. This year’s worst smog was reported in Beijing and its surrounding areas over the weekend.

The fine dust concentration is particularly serious in the nation’s central region, including Seoul and nearby areas. According to Air Korea and other fine dust watchers, Seoul’s fine dust level surged to 194 micrograms per cubic meter as of 4 p.m, with its ultrafine dust fine level reaching 148 micrograms, nearly six times the WHO’s recommended level of 25 micrograms.

South Korea’s authorities have classified the level of ultrafine dust particles above 35 micrograms per cubic meter as “bad” and above 75 micrograms as “very bad.”

Throughout the weekend, the level of ultrafine dust hovered around 80 to 90 micrograms in the capital area, forcing citizens to refrain from outdoor activities.

The latest wave of fine dust began Friday, when cold northern winds gave way to warm winds from China. Seoul Mayor Park Won-soon last week rebutted Beijing’s recent allegation that China has nothing to do with hazardous fine dust over the Korean Peninsula. Park said he has research papers from municipal and state labs that conclude around 50 to 60 percent of fine dust over South Korea is from China.

The Korea Meteorological Administration said the nationwide levels of fine dust will begin to fall Tuesday afternoon, when chilly winds from the north bring down the temperature and blow away the fine dust.

Most citizens going to work Monday morning were seen wearing masks to protect themselves against harmful ultrafine particles.

“The sky is too thick with fine dust. It’s like seeing a black-and-white TV. I’m afraid of even breathing because of the dark sky,” said a Seoul citizen named Lee.

A Daejeon citizen surnamed Kim said: “Even though I used a mask, my throat is sore and my eyes are irritated. Even the air smells bad from the heavy fine dust.”