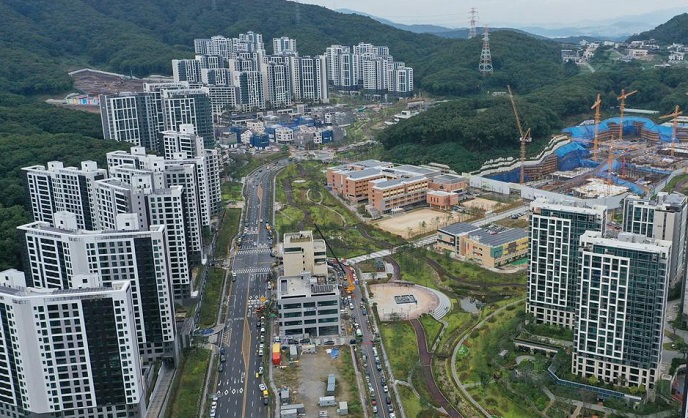 This file photo taken Oct. 5, 2021, shows the site of an urban development project in the city of Seongnam, Gyeonggi Province. (Yonhap)

SEOUL, May 13 (Korea Bizwire) — Seoul citizens choose to move to neighboring Incheon and Gyeonggi Province not just to find cheap, affordable homes but to move to a new, quality residences, a survey showed Thursday.

The Seoul Institute conducted a survey of 2,085 residents in Seoul, Incheon and Gyeonggi Province who had moved in the previous five years.

The results showed that the percentage of those leaving Seoul to move into homes (from 30.1 percent to 46.2 percent) or apartments (from 42.6 percent to 66.8 percent) in the province rose significantly.

The overall cost of housing has dropped, leading to higher housing benefits.

The rate of increase in the number of household members leaving Seoul for Gyeonggi Province, at 18.7 percent, was higher than the percentage of those moving from the province to Seoul (12.9 percent).

Statistics showed that some 124,870 people moved out of Seoul in 2020 for housing and family reasons.

Survey respondents picked house size (31.4 percent) as the most important factor for choosing to move out.

Close to two-thirds of the respondents said they moved from Seoul to a bigger home in Gyeonggi Province, which was more than double the similar response among those who moved to the capital city (28.5 percent).

“Real estate policies that have been restricting apartment supply have prompted residents to leave Seoul,” the institute said.

Among former Seoulites who moved to Gyeonggi Province or Incheon, 46.5 percent still showed a high level of dependency on Seoul.

Another 36 percent visited Seoul for work or school, carrying out the core part of their lives in the capital city.