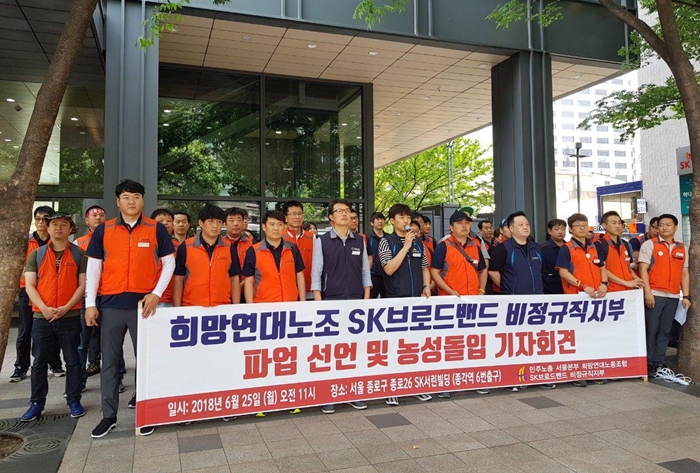 The company’s union held a press conference yesterday in front of the company’s main office in Jongno, Seoul to reveal plans to hold a strike for two days on July 29 and 30, when all of its union members will come together and stop work operations.

The labor union stated that although the Moon Jae-in administration had helped SK’s Broadband’s temporary workers gain permanent positions within the company, union leaders stressed that workers were still receiving minimum wage and had to deal with poor working conditions.

In addition, the labor union asked that 240 contract workers at SK Broadband’s offices in Gangseo, Mapo and Jeju be given new permanent positions.

The labor union explained that 90.8 percent of its members, totaling 1,273 workers, were in favor of the strike when put to vote earlier in the month.

A sum total of 1,474 workers including members of a second labor union were also in favor of the strike. The number of labor union members make up 46 percent of the 4,700 employees that fall under Home & Service.

Management of the maintenance company said it would place non-union member workers in the task force to normalize operations as much as possible.