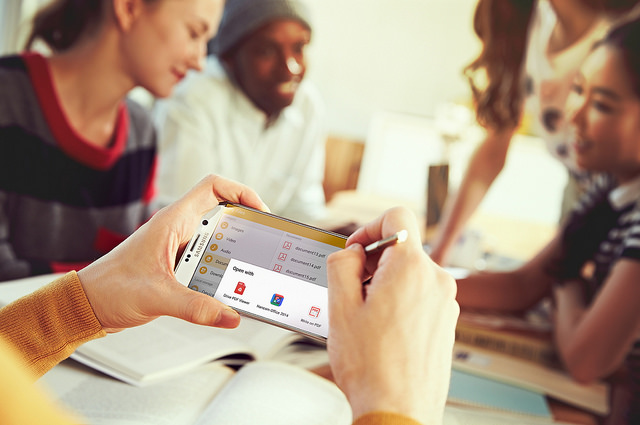 SEOUL, Sept. 4 (Korea Bizwire) – Recently, Korean smartphone makers are cutting prices for their newly introduced products in Korea to lure customers who have become more sensitive to price tags due to the mobile device distribution act.

According to industry representatives, Samsung Electronics set the price tag of its Galaxy Note5 at 899,200 won when it rolled out the product last month. Although it is just 200 won less than 900,000 won, Samsung is promoting it as the first Galaxy product at the 800,000 won level. At the same time, it lowered the price tag of the Galaxy Note4 to 799,000 won from 957,000 won.

In addition, LG Electronics lowered the price of its flagship smartphone model G4 to 699,600 from 825,000 in August. With its 600,000 level premium smartphone, LG is expected to compete with other mid and lower priced products, even though it’s only 400 won away from being a 700,000 won level product.

Such price marketing applies to low and middle priced smartphones and phone rate plans. Samsung priced its Galaxy J at 297,000 won. With a 200,000 won level price, it seems to have significant price competitiveness. Its Galaxy Folder is also 297,000 won.

Earlier this year, mobile carriers promoted their data-oriented rate plans at 29,900 won, stressing free voice calls at the 20,000 won level. However, the price is really almost 30,000 and moreover, it did not include value added tax.

An industry official said, “Currently, it has become common to see price tags with a 9 as a second digit to lead the customers to think their products are not expensive.”

“With the implementation of the device distribution act, customers have become more sensitive to prices, and the smartphone makers and mobile carriers want to maximize their returns while trying to make prices look as low as possible,” he added.